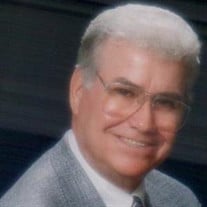 F. L. “Tommie” Thompson Surrounded by family and loved ones, On November 14, 2017 at 8:45 PM Tommie slipped his earthly bonds and winged his way to eternal peace. Franklin Lavonne “Tommie” Thompson, the son of Alva Lee and Jessie Edith (Perkins) Thompson, was born December 23, 1932 at Augusta, Kansas. He was baptized in 1939 at the First Baptist Church in Augusta. He was one of six sons born to this union, Darrell, Harold, Dean, Ferralee, Dorwin, and Tommie. He attended the Augusta and Lost Springs grade schools and graduated from Lost Springs High School, Lost Springs, Kansas. Tommie then attended LaSalle Business College in Chicago where he received his accounting degree. Tommie honorably served his Country in the Kansas Air National Guard during the Korean and Vietnam Wars and retired as a Major. Tommie was united in marriage to Bonnie Briix on January 8, 1950 at Cottonwood Falls, Kansas. The young couple established their first home together in McPherson and they were blessed with the birth of four children, three daughters and one son, Christine, Roxanne, Toni, and Mike. Through the years Tommie was a partner in Superior Pontiac / Cadillac and Lobban Motor Company both of McPherson; owned and operated Thompson General Insurance Agency which was the only independent agency at the time to start from scratch. In other words, no buy out of another agency, nor was Tommie ever involved in another agency, which was very rare for the times. Thompson General Insurance Agency was the first independent agency for Allstate Insurance allowing independent agents to sell Allstate products. Lloyd’s of London recognized Tommie in the top 150 Insurance agents in the United States. They invited Tommie to London, England as their personal guest. Tommie was partner of Quality Motor Company of Independence, Kansas and was the driving force to get the first dealership to have Ford and Chrysler products under one roof in the nation. He was a partner in the Target Drilling Company; owner of Cherokee Oil and Gas; partner of Gold and Silver mining operations in Arizona; was a partner in Eagle Resources, Inc.; for 21 years co-owned and operated Thompson Transport, was co-owner of Economy Hearing Aid; Tommie had an inherent love for animals, and especially enjoyed time with his dogs and was a thoroughbred horse breeder and German Shorthaired Pointer dog breeder to the end, and was recognized as one of the top breeders in the U.S. He shipped his dogs all over the US and Germany. Tommie met and fell for a sweetheart, Charlene Rudman and they enjoyed life together for many years as companions. This also brought Charlene’s children, Troy, Shane, and Lance into the fold. Tommie and Charlene attended the Countryside Covenant Church in McPherson. He was a life member of the American Legion Post 24, McPherson. The National Business Who’s Who, contacted Tommie wanting him to agree to be in their Who’s Who Publication about him putting dual dealership of Ford and Chrysler in the same dealership. His picture would be next to Lee Iacocca, but he declined the invitation. Tommie was a Christian, loving and caring husband, father, grandfather, great-grandfather; brother, uncle, and dear friend. His wise counsel, gentle but firm guidance, and gracious smile will be missed by those who knew and loved him. He loved his children and always wanted the best for them. Tommie was especially fond of his grandchildren and great-grandchildren, always looking forward to their visits and times they would share together. He enjoyed raising his dogs and horses, hunting, fishing, camping, and doing research for medical and alternative medicine. He was preceded in death by his parents, Alva and Edith Thompson; his five brothers, D.V. Thompson, Harold L. Thompson, A.F. Thompson, Dean Thompson, and Dorwin Thompson. Tommie is survived by his companion, Charlene Rudman, of McPherson, Kansas; his children, Christine "Chris" Maxey, of Madison, Mississippi, Roxanne Schmidt and her husband Tim, of McPherson, Kansas, Toni Ortiz and her husband Ron, of Parkville, Missouri, and Mike Thompson and his wife Kim, of McPherson, Kansas; his step-children, Troy Rudman and his wife Chris, of Paso Robles, California, Shane Rudman and his wife Gina, of Lee's Summit, Missouri, and Lance Rudman and his wife Lori, of Arkansas City, Kansas; his 15 grandchildren, Paxton Mogenson and wife Jennifer, Shawn Mogenson, Jeremy Littrell and wife Jenny, Jarod Littrell and wife Tracy, Jordan Ortiz, Austen Ortiz, Olivia Ortiz, Mallory Roberts and husband Aaron, Shea Thompson, Samantha Rudman, Sean Rudman, Shane Rudman II and wife Minka, Morgan Rudman, Cassidy Rudman, Madison Rudman; his 11 great-grandchildren, Alex, Grayden, Kaden, Kaylee, Keaton, Weston, Wyatt, Brody, Ava, Lucas, and Adelaide; many nieces and nephews; other relatives and a host of friends. The memorial service will be held at 2:00 p.m., on Sunday, November 19, 2017 at the Glidden—Ediger Chapel, McPherson, Kansas with Larry Booker, Monty Bell, and Tim Foist officiating. Special music “I’ll Fly Away” and “Lead Me Home” will be played. Members of the American Legion Post 24 and Veterans of Foreign Wars Post 2715 will provide military honors. Burial will be at the Crestwood Memorial Park Cemetery, McPherson, Kansas at a later date. Tommie Bequeathed his body to KU Medical Center for Medical Research. In lieu of flowers, memorials are suggested to the Sunflower German Shorthaired Club or German Shorthaired Pointer Rescue (GSP) and may be sent in care of Glidden-Ediger Funeral Home, 222 West Euclid Street, McPherson, Kansas 67460.

The family of F.L. Tommie Thompson created this Life Tributes page to make it easy to share your memories.

Surrounded by family and loved ones,...

Send flowers to the Thompson family.