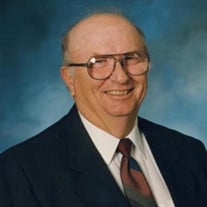 Floyd Flickinger, 89, of Canton, Kansas, passed away at 10:40 p.m., Saturday, November 13th, peacefully, with family at his side at McPherson Hospital, McPherson. Floyd was born in on his parents homestead rural Moundridge, Kansas on November 19, 1931, a son of Anna (Stucky) and Fred Flickinger. Floyd attended Farm School rural Moundridge and graduated from Moundridge High School, Moundridge, Kansas in 1950. Floyd Flickinger was united in marriage to Edith Neufeld on November 1, 1957 at Eden Mennonite Church, rural Moundridge, Kansas. It was a double wedding with Edith's younger sister Leona and Leland R. Goering. The young couple established their first home together in Newton, Kansas. This union was blessed with the birth of two sons, Randy and Darrin. Through the years they lived in Hesston, Newton, and rural Moundridge before moving to McPherson in 1965. Floyd and the family were deeply saddened by the death of Edith on January 23, 2015. He was a member of Eden Mennonite Church Moundridge, Kansas. Through the years Floyd worked on his parents farm, worked as a fabricator and foreman for the Hesston Corporation, owned and operated the McPherson Dairy Queen along with his wife Edith, worked Pipe extrusion for Certain-Teed Corporation, was a bagger and cleaner for John's Manville, was a driver for the AMPI Dairy, was a Custom Cutter covering the midwest from Texas to Canada, worked as a driver for MCDS, and worked for Neighbor's Cafe. Floyd enjoyed hunting, fishing, camping, dirt track racing, watching wrestling, basketball and all sports, following his children and grandchildren in their sports and activities. He is survived by his sons, Randy Flickinger and wife Sandi, of Canton, Kansas and Darrin Flickinger and wife Sherri, of rural Alden, Kansas; his siblings, Leland Flickinger, of Moundridge, Kansas, Laverne Flickinger and his wife Luene, of Moundridge, Kansas, Evelyn Schrag and her husband Norvin, of Moundridge, Kansas, and Marvin Flickinger and wife Rita, of Newton, Kansas; his three grandchildren, Tiffany Rohr and husband Scott, Aaron Flickinger and wife Sarah, and Amanda Graham and husband Wade; his seven great-grandchildren, Kinsley Rohr, Wesley Rohr, Wayland Flickinger, Ellie Flickinger, Leland Flickinger, Casynn Graham, and Roanin Graham; many nieces and nephews other relatives and a host of friends. Floyd was preceded in death by his parents, Anna and Fred Flickinger; his wife Edith Flickinger. (Floyd, Leland, Laverne, Evelyn, and Marvin) Visitation will be on Wednesday November 17, 2021 from 4 p.m. to 6 p.m. at Glidden - Ediger Chapel, McPherson. The funeral service will be held at Eden Mennonite Church, Moundridge, Kansas, at 11:00 a.m. on Thursday, November 18th, 2021. The service will be livestreamed at Join Zoom Meeting at: https://us02web.zoom.us/j/82092877582?pwd=VkNNRzBGR0dRQzZHalJlRmMyTU4xZz09 Burial will be in the Eden Mennonite Church Cemetery Moundridge, Kansas. In lieu of flowers, memorial contributions may be made to Meals on Wheels or the Alzheimer's Association and they can be sent in care of the Glidden - Ediger Funeral Home; 222 West Euclid; McPherson, Kansas 67460.

Floyd Flickinger, 89, of Canton, Kansas, passed away at 10:40 p.m., Saturday, November 13th, peacefully, with family at his side at McPherson Hospital, McPherson. Floyd was born in on his parents homestead rural Moundridge, Kansas on November... View Obituary & Service Information

The family of Floyd Flickinger created this Life Tributes page to make it easy to share your memories.

Send flowers to the Flickinger family.