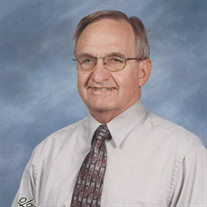 Garrett Wheaton, 85, of McPherson, Kansas, passed away at 1:27 a.m., Monday, June 11th, 2018 peacefully at Cedars Health Care Center. Garrett was born in rural Lewis, Kansas on February 17, 1933, a son of Opal Naomi (Dorland) and Lynn Otis Wheaton. Garrett attended Lewis Elementary School and graduated from Lewis High School, Lewis, Kansas in 1951. Then he attended Garden City Junior College, Garden City, Kansas where he received his Associates of Science Degree and then graduated from Fort Hays State University in 1956. Later Garrett graduated from Kansas University, Lawrence, Kansas with his Master's Degree in Education in 1966. He was a member of First Presbyterian Church McPherson. While living in Lyons he attended Lyons First Baptist Church, Lyons, Kansas. Through the years Garrett taught and coached at Soldier High School, Soldier, Kansas from 1956 through 1962, Minneapolis High School, Minneapolis, Kansas from 1962 through 1964 and then Oak Park River Forest High School near Chicago, Illinois from 1964 through 1966. Garrett Wheaton came to U.S.D. #405 Lyons High School, Lyons, Kansas in 1966. He taught business classes, Physical Education, Health/Orientation, and Driver's Education. He was the Athletic / Activities Director for 29 years and the Transportation Director 10 years. He served as an assistant football and basketball coach of 2 years and was head track coach for 20 years. He had the honor of coaching the Lyons track teams to 3 state, 8 regional, and 10 league titles. His many years of involvement in FCA have also been a very valuable contribution to the development of many young athletes. He received numerous awards as a coach, and director through the years. Garrett was a member of Kansas Coaches Association, Kansas Interscholastic Athletic Administrators Association, Fellowship of Christian Athletes and was on the board of the FCA Kansas State Board. Garrett enjoyed spending time with his family and friends, sporting events, was very good working with his hands and enjoyed wood crafts, farming and helping his In-laws and family on the farm near Lewis, Kansas where he grew up. Garrett Eugene Wheaton was united in marriage to Verla Maxine Stade on January 17, 1954 in Lewis, Kansas. The young couple established their first home in Soldier, Kansas. Maxine died May 11, 2001. Garrett was united in marriage to Patricia Adele Lusk on August 30, 2003 in McPherson, Kansas where they established their home together. He is survived by his wife Patricia Wheaton, of McPherson, Kansas; his sons David Wheaton, of Kansas City, Missouri; Sheldon Wheaton, of Olathe, Kansas; his step -daughter Linda Koch, of Wichita, Kansas; his step-son Corwin Lusk, of Loveland, Ohio; his sister Zelma Mead and her husband Jeff, of rural Lewis, Kansas; his grandsons, Jeffrey and Matthew Wheaton and several step-grandchildren; many nieces and nephews; other relatives and a host of friends. Garrett was preceded in death by his parents; his 1st wife Maxine Wheaton and his sister Loretta Sthole Visitation will be held on Thursday, June 14, 2018 from 6:00 p.m. to 8:00 p.m. at the Glidden - Ediger Chapel. Funeral service will be held on Friday, June 15, 2018 at the Glidden-Ediger Chapel at 10:00 a.m. with Pastor Lynn Scott officiating. Graveside service will be held on Friday, June 15, 2018 at 1:30 p.m. at the Wayne Cemetery, rural Lewis, Kansas In lieu of flowers, memorial contributions may be made to Fellowship of Christian Athletes or Lyons High School Track and Field and they can be sent to Glidden-Ediger Funeral Home; 222 West Euclid St.; McPherson, Ks. 67460.

The family of Garrett E. Wheaton created this Life Tributes page to make it easy to share your memories.

Send flowers to the Wheaton family.