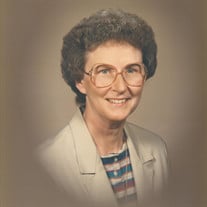 Gelene Berniece Steffy, 90, of McPherson, KS, passed away at 12:33 a.m., Thursday, June 27th, 2019 peacefully at Wesley Medical Center, Wichita, Kansas. Gelene was born in New Sharon, Iowa on January 31, 1929, a daughter of Arno Linneous and Nellie Berniece (McCoy) Craver. Gelene attended Mill Grove Country School and graduated from Montezuma Consolidated High School, Montezuma, Iowa. She was a member of St. Anne's Episcopal Church in McPherson. Gelene was a homemaker and she took great pride in providing for her family in this manner. Later she worked in the office of Francis Hawn who was an independent oil producer and later spent 20 years at the McPherson County Health Department as secretary and worked with the WIC program. She retired in 2004. Gelene enjoyed gardening, reading, going to shows, plays, and theater, traveling, and spending time with her family. Gelene Craver was united in marriage to Kaye Samuel Steffy on September 3, 1949 at Montezuma, Iowa. The young couple established their first home together in Montezuma. Through the years the couple lived in Iowa, Missouri, Kansas, Texas, Arkansas before moving back to McPherson in 1976. Sam died on December 17, 2017. She is survived by her daughter, Kari Kay Steffy, of Haysville, Kansas; her brothers, Arthur Craver, of Montezuma, Iowa and Larry Craver and his wife Deanna, of Newton, Iowa; many nieces and nephews, other relatives and a host of friends. Gelene was preceded in death by her parents, and a son Steven Steffy, and her husband Kaye "Sam" Steffy and a brother Paul Craver. A memorial service will be held Friday, July 5, 2019 at 10:00 a.m. at St. Anne's Episcopal Church, McPherson, Kansas, with the Reverend Basil Price officiating. Burial will be at Montezuma Cemetery, Montezuma, Iowa at a later date. Memorial contributions may be made to St. Anne's Episcopal Church and they can be sent to Glidden - Ediger Funeral Home; 222 West Eucild Street; McPherson, Kansas 67460.

The family of Gelene Steffy created this Life Tributes page to make it easy to share your memories.

Gelene Berniece Steffy, 90, of McPherson, KS, passed away at...

Send flowers to the Steffy family.