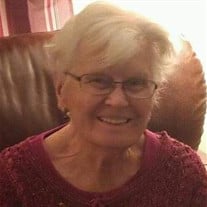 Glenna Ann Wiens Heidebrecht passed away peacefully at 83 years of age on Tuesday afternoon, October 30, 2018, at Autumn Leaves of South Austin, a memory care facility. Glenna was born during the Depression (May 9, 1935) to a hard-working couple who had just moved back to central Kansas, from the dust-ridden Texas Panhandle.  Her parents were Edward Ediger Wiens and Martha (Androes) Wiens. She was the third of five children.  At this time, her father switched from farming to owning and operating, with his brother, a mechanic shop on Main Street, servicing autos, tractors, and combines in Inman, a rural town of 800, where Glenna grew up. Her mother kept house and was an excellent cook, baker, and seamstress.  Per a small notebook kept over the years, she took in sewing jobs to help support the family, often for pennies! Her father, a deacon at Inman Mennonite Church, was stern and her mother was very patient. Glenna was related to a good percentage of the people in this town and the surrounding area. This was because she and her ancestors were members of the Mennonite Church. And her large group of ancestors migrated from country to country together as they were persecuted and forced out for being pacifists and for practicing adult baptism, beginning in the mid-1500s. Her ancestors migrated from Switzerland to Flanders (present-day Belgium) to the Netherlands to Poland (Prussia) to Ukraine and finally to the United States and Canada. She was 5-10 years old during WWII and remembers well the rationing and the shortages that occurred during that time.   She was a cheerleader and ranked very high in her high school graduating class and married her high school sweetheart right after graduating at the age of 18 in 1953. Her husband, LeRoy Ernest Heidebrecht, was born and raised on a farm just 5 miles from the small town where Glenna was raised. He won athletic scholarships and, thus, was able to be the first member of his family to graduate from college. When he graduated from college in 1957, they already had one daughter and a son was born a week after graduation.  Glenna provided a lot of the financial support during this time by working outside the home. After graduation, they moved to the suburbs of Kansas City, Kansas.  LeRoy became a C.P.A. while working for a large accounting firm. During this time, another son and daughter were born, bringing the total to 4 children, Rhonda, Brenton, Bradley, and Melissa. The family moved back to McPherson, Kansas area where Glenna and LeRoy were born and raised and where they retired. In retirement, they bought an RV and travelled around the U.S.  Glenna has very fond memories of this time. Glenna and her husband had been married for 58 years when he passed away in 2011.   Glenna worked outside the home most of her adult life.  She also sewed for the family and really enjoyed gardening, especially flowers. She also enjoyed spectating at her children's and grandchildren's athletic events.  They played baseball, volleyball, basketball, football, and participated in various track events. She rooted very enthusiastically from the stands.  She and LeRoy also held Kansas City Chiefs season tickets for 30 years. Though she never took an art or craft class, she had an eye for color and design as expressed by shopping for and decorating her home and putting together what she wore into aesthetically pleasing outfits.  She had a strong desire to make sure that everyone was taken care of, especially those who couldn't speak up for themselves. Her keen sense of humor and gracious, elegant demeanor will be greatly missed by those who knew and loved her.   She was preceded in death by her parents and an older brother (Wilber Ray Wiens) and sister (Luella Wiens Lohrentz).   Surviving family members include her four children, Rhonda Leigh Heidebrecht and her spouse Rachel Devillier of Austin, Texas, Brenton Lee Heidebrecht and his wife Bonnie of Austin, Texas, Bradley Lee Heidebrecht and his wife Abbey of McPherson, Kansas, Melissa Lea Frisbie and her husband Paul of Johnstown, Colorado; her eight grandchildren, Andrew Heidebrecht (spouse Bina), Tyler Heidebrecht, Allison Heidebrecht High (Chris), Will Heidebrecht, Grace Heidebrecht Strella (Zach), Gretchen Heidebrecht, Delaney Frisbie and Benjamin Frisbie; one great-granddaughter and another great-grandchild on the way; her sister, Doris Wiens Mengarelli and her brother, Eldon Wiens; several nieces, nephews, cousins, other relatives and a host of friends.  Visitation will be held on Monday, November 5, 2018 from 9:30 am to service time at the Glidden - Ediger Chapel, McPherson, Kansas. The memorial service will be held on Monday, November 5, 2018 at 11:00 am. at Glidden–Ediger Chapel with Pastor Ron DeVore officiating. The final resting place will be at the McPherson Cemetery, McPherson, Kansas.  Memorials in memory of Glenna, in lieu of flowers, are suggested to the Alzheimer’s Association or the Giving Hope Fund and they can be sent in care of the Glidden-Ediger Funeral Home; 222 West Euclid Street; McPherson, Kansas 67460.

Glenna Ann Wiens Heidebrecht passed away peacefully at 83 years of age on Tuesday afternoon, October 30, 2018, at Autumn Leaves of South Austin, a memory care facility. Glenna was born during the Depression (May 9, 1935) to a hard-working... View Obituary & Service Information

The family of Glenna A. Heidebrecht created this Life Tributes page to make it easy to share your memories.

Send flowers to the Heidebrecht family.