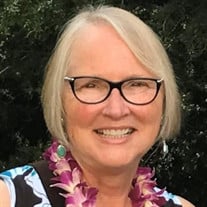 Glenna Rae Premer (White) passed away on the morning of November 6, 2021. She was being treated for leukemia at the University of Kansas Medical Center and passed away suddenly. She was 68 years old. Glenna was born on September 2, 1953 in Sayre, Oklahoma, the daughter of Clarence W. and Ruth Susie (Cooper) White. Her family moved to Guthrie and then to Perry, Oklahoma where she graduated from Perry High School. Glenna married LeWayne Arden Premer on April 30, 1976. LeWayne brought two children, Roni and Randy, to the marriage. Later, Glenna and LeWayne added two more children, Ann and Ryan, to their family. The family settled in McPherson, Kansas where her husband and his brothers would own and operate Sirloin Stockades and later Montana Mikes across Kansas, Oklahoma, and Arizona. They also had the Best Western Holiday Manor in McPherson, Kansas, which LeWayne’s parents Lester and Grace had owned and operated. Glenna raised their children and supported her husband and their business. She was a vivacious, doting mom who deeply loved her children and provided heaps of encouragement. After her husband passed away and her children had graduated from college, Glenna moved to Lawrence where she has lived the past 17 years. Glenna fell in love with Lawrence after spending so much time there while her daughter was at the University of Kansas. She loved being a part of the community and had dear friends in her neighborhood. She was known to all in the Westwood Hills neighborhood where she was seen daily with a smile walking her beloved dogs, “the girls” Isabel and Lilli. In 2017, her daughter, Ann, and her family returned to Lawrence and moved to the same neighborhood as Glenna. Glenna “Nonna” became a fixture for her granddaughters, Mia and Libby, and was there for countless basketball games, soccer games, ballet recitals, piano recitals, birthdays, holidays, movies, dinners, swimming at the neighborhood pool, baking lots of cookies and just hugs. In McPherson, Glenna worked as a reporter at the McPherson Sentinel. Later, she worked as a court-certified mediator. She was the first coordinator of the small claims mediation project in the McPherson District Court from 2002 to 2004. She received mediation certificates from Bethel College and was certified by the Kansas Supreme Court. She started the Mediation Resource Center, Inc., a non-profit in Douglas County in 2007. In 2008, the Heartland Mediators Association presented her with the Margaret “Peg” Nichols Volunteer of the Year Award for distinguished service and commitment in the practice of conflict resolution. Glenna is survived by her daughter, Ann Premer and husband Rich Federico and their daughters Emilia “Mia” Premer Federico and Elizabeth “Libby” Premer Federico all of Lawrence. She is also survived by her children and family through LeWayne, daughter, Roni Hernandez of Albuquerque (husband, Michael), son, Randy Premer of McPherson, grandson Aaron Premer (wife, Makenzie Premer), granddaughters, Jessica Larson (husband, Eric Larson), Melissa Gibbons (husband, Michael Gibbons), Michaela Hernandez, and great-granddaughters, Reghan and Gentry Premer, and Maya and Ella Larson, other family and a host of friends. She was preceded in death by her husband, son, Ryan, parents, Clarence and Ruth White, and her three brothers, Clarence Richard, Gene, and Gary White. Glenna is deeply missed by her family and friends who will hold on tightly to the love and grace she gave them. Visitation will be held on Thursday, November 11, 2021 from 5 to 7 p.m. at the Glidden - Ediger Chapel, McPherson. Funeral services will be at 10:30 a.m., Friday, November 12 at the First United Methodist Church, McPherson, Kansas with Rev. Emily Spearman Cannon officiating. The service can be seen on the Church's Facebook page at: http://www.mcphersonfumc.com Burial will be in the McPherson Cemetery. Memorial donations may be made to the Lawrence Humane Society or the First United Methodist Church in McPherson and they can be sent in care of the Glidden - Ediger Funeral Home; 222 West Euclid Street; McPherson, Kansas 67460.

Glenna Rae Premer (White) passed away on the morning of November 6, 2021. She was being treated for leukemia at the University of Kansas Medical Center and passed away suddenly. She was 68 years old. Glenna was born on September 2, 1953 in... View Obituary & Service Information

The family of Glenna Rae Premer created this Life Tributes page to make it easy to share your memories.

Glenna Rae Premer (White) passed away on the morning of November...

Send flowers to the Premer family.