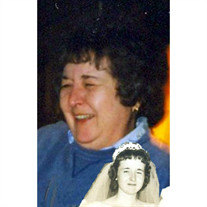 Gloria A. Benson, 76, of McPherson, Kansas, passed away at 12:45 p.m., Wednesday, August 19th, 2015 while in the company of her husband Gordon , at Via Christi ,St. Francis , Wichita, Kansas. Gloria Annette Benson, daughter of Fred F. and Rocendia (Phillips) Schick, was born March 7, 1939 at Kansas City, Kansas. She was one of three daughters born to this union, Gloria, Joyce, and Fredna. She attended the Kansas City grade schools and graduated from Wyandotte High School, Kansas City, Kansas in 1957. It was during these years that she met and fell in love with a neighbor who just lived behind her and across the alley. Gloria was united in marriage to Gordon L. Benson on October 23, 1959 at the Zion Evangelical Church, Kansas City, Kansas. The young couple established their first home together in Kansas City, Kansas. Gloria worked for A.T.& T. as office staff and was a homemaker and she took great pride in providing for her family in this manner. In 1996 the couple moved to McPherson, Kansas. Gloria was a Christian, loving and caring wife, sister, aunt, and dear friend. Her wise counsel, gracious smile, and sense of humor will be greatly missed by those who knew and loved her. Gloria was blessed with a great husband and he made sure that she had everything she needed. About 20 years ago, Gloria began having some health issues that had to be addressed and, ended up dealing with many doctors through the years. Every step of the way Gloria had a positive outlook and took everything in stride. She loved when all of the family would get together, and she enjoyed her homemaking, cooking and the requested Chicken and Noodles were always asked for. She also enjoyed traveling to Western Colorado, Wyoming, and Missouri with Gordon and other family members. She spent many hours sewing, crocheting rugs, cooking and baking. Gloria was fortunate to have learned to make and have many home recipes from Gordon’s mom. She was a great cook and she made everything from scratch, such as her breads, potato salad, cookies, and cakes. On holidays when the families would get together, the boys would go hunting or fishing, and the girls would go shopping or antiquing, and then return home and have dinner all ready for when the boys returned. Gloria Annette Benson, 76, of McPherson, Kansas, passed away at 12:45 p.m., Wednesday, August 19th, 2015 while in the company of her husband Gordon, at Via Christi, St. Francis, Wichita, Kansas. Gloria was preceded in death by her parents, a sister, Fredna Schick, a brother-in-law, Larry Wallace, and a brother-in-law, Bill Maurer. Gloria is survived by her husband of over fifty-five years, Gordon Benson, of McPherson, Kansas; her sister, Joyce Serwon, of Overland Park, Kansas; her sisters-in-law, Barbara Wallace, of McPherson, Kansas and Linda Maurer, of Excello, Missouri; her nephew, Chris Wallace and his wife Catrina, of McPherson, Kansas; her niece, Kim McHugh and her family of Rockton, Illinois; her great-niece and nephew, Alayna and Hayden Wallace; many cousins, other relatives and a host of friends.Friends are invited to call on Sunday, August 23, 2015 from 2 to 4 p.m. at Glidden - Ediger Chapel, McPherson, Kansas. The funeral service will be held at Glidden - Ediger Chapel, McPherson, Kansas, at 3:00 p.m. on Monday, August 24th, 2015 with Mr. Gary Witcher officiating. Special music “In The Garden”, “Softly and Tenderly”, and “Sweet Hour of Prayer” will be played. The final resting place will be at the McPherson Cemetery McPherson, Kansas. In lieu of flowers, memorial contributions may be made to Relay for Life McPherson or the Larry Wallace Nursing Scholarship and they can be sent in care of the Glidden - Ediger Funeral Home; 222 West Euclid Street; McPherson, Kansas 67460. CASKET BEARERSLuke Aichele David Gale Darrell Randolph Bob Ruxlow Tom Ruxlow Chris Wallace Hayden Wallace

Gloria A. Benson, 76, of McPherson, Kansas, passed away at 12:45 p.m., Wednesday, August 19th, 2015 while in the company of her husband Gordon , at Via Christi ,St. Francis , Wichita, Kansas. Gloria Annette Benson, daughter of Fred F. and Rocendia... View Obituary & Service Information

The family of Gloria A. Benson created this Life Tributes page to make it easy to share your memories.

Send flowers to the Benson family.