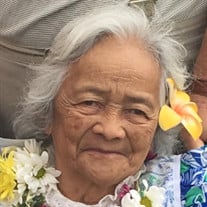 Gloria Burch, 80, of McPherson, Kansas, passed away at 9:23 p.m., Sunday, February 3rd, 2019 while in the company of family members, at McPherson Hospital. Gloria was born in Honolulu, Hawaii on April 18, 1938, the daughter of Graciano and Matilda (Baron) Rulona. Gloria attended Kailua Elementary Schools, Junior High and Roosevelt High School in Kailua Hawaii . She attended the Countryside Covenant Church McPherson Gloria was a homemaker and she took great pride in providing for her family in this manner. Through the years Gloria worked as an Aide for McPherson City Hospital; a Nurse's Aide for Unruh Personal Care Home; Desk Attendant for the Y.M.C.A.; and was a Housekeeper for Best Western Holiday Manor all of McPherson. Gloria was a member of the Rebecca's Odd Fellows. Gloria enjoyed fishing, camping, starting the women's volleyball league spending time going to her kids and grand kids sporting events, watching KU Basketball games. Gloria was a self-taught woman, teaching herself how to knit, crochet, embroidery and loved working in her flower garden. Gloria Rulona was united in marriage to Charles Edgar Burch on May 9, 1954 in Kailua, Hawaii. The young couple established their first home together in McPherson. This union was blessed with the birth of five children, three daughters and two sons. . She is survived by her husband Charles Burch, of McPherson, Kansas; her children, Teresa Mandevill and her husband Garry, of Bluff City, Kansas, Charles Burch, Jr. and his wife Miriam, of Overland Park, Kansas, Gloria Jean Vernon and her husband Larry, of McPherson, Kansas, Vaughan Burch and his wife Jennifer, of McPherson, Kansas, Molly Stucky and her husband Dale, of McPherson, Kansas; her brothers, Al Rulona, of New Hampshire, Danny Rulona, of Waimanalo, Hawaii, Roy Rulona, of Kaneohe, Hawaii and Franklin Rulona, of Waimanalo, Hawaii; She is also survived by 14 -grandchildren, 23 -great-grandchildren and 1 -great-great-grandchild Gloria was preceded in death by her parents; her sister Carmen Rulona and her granddaughter Heather Burch. A memorial service will be held on Sunday, February 10, 2019 at 1:00 p.m. at the Glidden-Ediger Chapel, with her grandson Dan Stevens officiating. In lieu of flowers, memorial contributions may be made to Y.M.C.A Scholarship for Kids or Friends of Maxwell and they can be sent to Glidden-Ediger Funeral Home; 222 W. Euclid St., McPherson, Ks. 67460.

Gloria Burch, 80, of McPherson, Kansas, passed away at 9:23 p.m., Sunday, February 3rd, 2019 while in the company of family members, at McPherson Hospital. Gloria was born in Honolulu, Hawaii on April 18, 1938, the daughter of Graciano and... View Obituary & Service Information

The family of Gloria Burch created this Life Tributes page to make it easy to share your memories.

Send flowers to the Burch family.