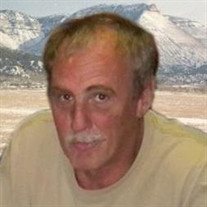 Gordon Ray Parks, 62, of McPherson, Kansas, passed away at 1:00 a.m., Thursday, May 4th, 2017 suddenly, at at his home. Gordon was born in Wichita, Kansas on January 24, 1955, a son of Adella Ruth (Bohn) Parks and Clement Roy Parks, Jr. Gordon attended Roosevelt grade school, Park School, McPherson Junior High and McPherson High School, McPherson, Kansas. It was during his high school years, Gordon enlisted in the United States Marine Corps where he received his GED. Sometime during boot camp, he was honorably discharged. Through the years, Gordon worked as a frame builder for Danielson's Design's, worked for Clark Arms as a gunsmith, worked as an roughneck on the oil rigs in Kansas and Colorado. Gordon enjoyed hunting, fishing, camping, playing pool, his family especially his grandchildren. Gordon Parks was united in marriage to Debi Gosen on May 1, 1981 at the First Christian Church, McPherson, Kansas. The young couple established their first home together in McPherson. This union was blessed with the birth of three children, two sons and one daughter, James, Kristin, and Tyler. They moved to Trinidad, Colorado to attend Gun Smithing School. He then moved to Grand Junction, Colorado in 2004 until he moved to DeBeque, Colorado. Gordon came back to McPherson in 2015. Gordon is survived by his children, James Parks and his wife Kristina, of Burleson, Texas, Kristin Hall and her husband Ephraim, of Wichita, Kansas, and Tyler Parks, of DeBeque, Colorado; his mother, Adella Parks, of McPherson, Kansas; his siblings, Bill Parks, of Grand Junction, Colorado, Tim Parks, of Rifle, Colorado, Becky Prichard and her husband Chuck, of DeBeque, Colorado, and Brenda Carlson and her husband Robert, of McPherson, Kansas; his 6 grandchildren, Brooklyn and Ellie Parks, Elijah Parks, Colby and Jaden Hall, Jace Parks; several nieces and nephews, other relatives and a host of friends. Gordon was preceded in death by his father Clement Roy Parks, Jr.; brother Monty Parks; Niece Shayna Prichard; Nephews, Cole and Cody Parks. Visitation with the family will be held on Wednesday, May 10, 2017 from 6 to 8 p.m. at Glidden - Ediger Chapel, McPherson, Kansas. The memorial service will be held at First Christian Church, McPherson, Kansas, at 11:00 a.m. on Thursday, May 11th, 2017 with Pastor Lynn Scott officiating. The final resting place will be held at the McPherson Cemetery McPherson, KS. In lieu of flowers, memorial contributions may be made to Gordon Parks Memorial Fund and they can be sent in care of the Glidden - Ediger Funeral Home; 222 West Euclid Street; McPherson, Kansas 67460.

The family of Gordon Ray Parks created this Life Tributes page to make it easy to share your memories.

Send flowers to the Parks family.