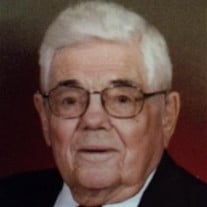 H. Maurice Lichty, 100, of Nebraska City, Nebraska passed away Tuesday, May 30th, 2017 at Ambassador Care Center. Maurice was born in Carleton, Nebraska on May 20, 1917, son of Anna Frances (Way) and Allen R. Lichty. Maurice attended and graduated from the Carleton, Nebraska schools in 1935. He was a member of Church of the Brethren McPherson, Kansas where he was a past Deacon and participated in transportation ministry. Maurice served in the U.S. Army as a Staff Sgt. in WW II and was honorably discharged. Maurice owned and operated an Oldsmobile Dealership in Emmetsburg, Iowa for many years. After moving to McPherson in 1972, he was employed as an Auto Salesman at Wallace Chevrolet McPherson, Kansas, for 13 years and he retired on December 31, 1985. Maurice was a member of the Kiwanis Club, and served on the Senior Citizen's Board, both of McPherson, Kansas. He enjoyed working out in his yard, traveling and was very good working with his hands and fixing things. On May 20th, 2017, all of his children and grandchildren and 18 of his 20 great-grandchildren, gathered in Nebraska City to celebrate his 100th birthday. Dad said what he liked the most was all the love in the room that day! H. Maurice Lichty was united in marriage to Mabelle Alyce Hite on June 2, 1946 at Emmetsburg, Iowa. She died on April 23, 1987. Surviving family members include his three daughters, Vonda Sue Williams and her husband John L., of Newnan, Georgia, Willo Jean Dammast and her husband Bill, of Nebraska City, Nebraska, and Ann Maureen Hendricks and her husband David, of South Bend, Indiana; his seven grandchildren, Brook and Amber Williams, Newnan, GA, Brendan and Sara Williams, Lincoln, NE, Jeff and Amanda Dammast, Auburn, NE, Heidi Dammast, Lincoln, NE, Sarah and Andy Wagoner, South Bend, IN, Seth and Laina Hendricks, Englewood, OH, and Stephen and Becca Hendricks, South Bend, IN; 20 great-grandchildren; other relatives and a host of friends. He was preceded in death by his parents, Anna and Allen Lichty; his wife, Mabelle Lichty; and brothers, Roland and Ross Lichty. Graveside service will be held at the McPherson Cemetery, McPherson, Kansas, at 11:00 a.m. on Friday, June 2nd, 2017 with Maurice's son-in-law, Pastor David Hendricks officiating. In lieu of flowers, memorial contributions may be made to Church of the Brethren or The Cedar's Resident's Assistance Fund and they can be sent in care of the Glidden - Ediger Funeral Home; 222 West Euclid Street; McPherson, Kansas 67460.

The family of H. Maurice Lichty created this Life Tributes page to make it easy to share your memories.

Send flowers to the Lichty family.