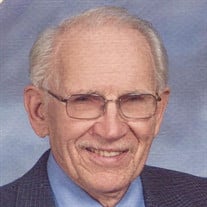 Harold Glenn Schlender, a prolific McPherson homebuilder, and one of the driving forces behind the renovation of the historic McPherson Opera House, passed away early Thursday morning, January 16, 2020, at The Cedars retirement village. The cause of death was complications arising from congestive heart failure. Harold was born on March 21, 1925 at Bethel Deaconess Hospital in Newton, Kansas, and grew up on a farm south of Moundridge. He was 94 years old at the time of his death. The third of eight children of Edna Mae (Nanninga) and Milton C. Schlender of rural Moundridge, Kansas, Harold entered first grade at the age of five—one year younger than his classmates—at North Garden School, a one-room schoolhouse in Harvey County not far from the family farm, and he graduated from Moundridge High School in May of 1942. After high school, Harold served two “hitches” in the U.S. Navy Medical Corps, from 1945-1948, primarily in Camp LeJune, North Carolina, and from 1951-1952 at the U.S. Naval Hospital at Mare Island, California. In his later posting, he was a surgeon’s assistant who helped to deliver literally hundreds of babies. In between those two Navy stints, Harold returned home to Moundridge to help with the family farm, and that is where he met Charlotte Lavae Ross, a newly minted schoolteacher who hailed from Haviland, Kansas, and who he would marry in 1948. She accompanied him to California, where in 1951 their first son – Greg – was born in the same hospital where Harold worked. (Harold was not allowed to participate in that delivery. Brent, the second son, would be born in 1954 in the same delivery room in Newton in which Harold was born 29 years earlier; and Debbie, their only daughter was born in McPherson in 1959.) After being discharged from the Navy, Harold and “CharLavae” as he called her, returned to the family farm where he built his first home – a mail-order kit-house from Sears Roebuck & Co. that arrived in pieces on a railroad car. And just like that, he had stumbled into his life’s calling. In 1956, the young couple decided to stop farming and move to the nearby community of McPherson, where Harold had hired on as a carpenter and soon became a framing foreman with Pyle Construction. Charlotte found a teaching position in nearby Inman. So they jacked up their little farmhouse, put some wheels underneath it, and quite literally moved it into town. Three years later they would move into a larger new home that Harold had built, this time with the help of fellow Pyle employees. By 1963, after more than a decade working for Pyle, Harold decided he wanted to set out on his own as a builder. He linked up with two brothers from Halstead, Kansas – Warren and Harold Harris – who had purchased a lumber yard (now known as Jantz Lumber) in McPherson. Over the next 33 years, the company they formed, Harris Development, would build more than 300 houses, transforming many of the town’s residential areas. These were not cookie-cutter homes: Harold drew up most of his own house plans, and rarely repeated a design. Although his company never bore his name, the homes he built were known around town as “Harold Schlender Homes.” Harold was reluctant to retire. But finally, in 1996, at the age of 72 he finally called it quits. That cleared the way for the biggest building project of his life – the restoration of the century –old McPherson Opera House. For the next 14 years, the Opera House was, as he put it: “the other woman in my life.” He spent hours each day tuck-pointing brick and stonework, building massive scaffolding to enable the restoration of the ceiling art as well as the fresco decorating the top of the stage. He and other retiree volunteers built a platform 70 feet up, 8 feet below the arching ceiling. Over the years, Harold became an exemplary civic citizen. He was a longtime member of the McPherson Chamber of Commerce and the National Homebuilders Association, and served on the boards of The Cedars, the McPherson Opera House, the McPherson Main Street association, and he also was instrumental in the Second Century Campaign at McPherson College which renovated much of the campus. He served as a longtime advisor to the McPherson High School Carpentry program and in 2018 was named a finalist in McPherson’s Philanthropist of the Year awards in recognition of his tireless support for community improvement. Harold was preceded in death by his wife of 57 years Charlotte Lavae; his eldest brother Frederick (wife Gwen) Schlender of Burrton, Kansas, and his younger sister Catherine (husband Levi) Becker of Newton, Kansas. He is survived by his three children, Greg (wife Shelley) of Boulder, Colorado; Brent (wife Lorna) of Sebastopol, `California; and Debbie (husband J. Douglas) Way, of Boulder, Colorado. His surviving siblings include elder brother Melvin of Wichita; younger brother John of Manhattan, Kansas; younger sisters Bethe (husband Kenny) Cowan of Topeka, and Lois Propp of Willmar, Minnesota; and younger brother Keith (wife Shirley) Schlender of Toledo, Ohio. He also had four grandchildren and one great grandchild, and dozens of nieces and nephews. Visitation will be held on January 29, 2020 from 5-7 pm at the Glidden-Ediger Chapel. The funeral Service will be January 30, 2020 at 2 pm at the First United Methodist Church in McPherson, Kansas. Family requests donations be made to The McPherson Opera House or The Cedars and they can be sent in care of the Glidden-Ediger Funeral Home; 222 West Euclid Street; McPherson, Kansas 67460

Harold Glenn Schlender, a prolific McPherson homebuilder, and one of the driving forces behind the renovation of the historic McPherson Opera House, passed away early Thursday morning, January 16, 2020, at The Cedars retirement village. The... View Obituary & Service Information

The family of Harold Glenn Schlender created this Life Tributes page to make it easy to share your memories.

Send flowers to the Schlender family.