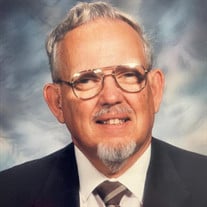 Herbert Laverne Johnson was born July 11, 1936 in Princeville, Illinois the first of two sons of Harold Elgin Johnson and Lorene Francis Kramer Johnson. After leaving the farm near Princeville, Illinois, his family moved to Canton, Illinois, Illiopolis, Illinois, Richmond, California, Beatrice, Nebraska, Lincoln, Nebraska, South English, Iowa, McPherson, Kansas, Garden City, Kansas, Adel, Iowa, York Center, Illinois, Wyers Cave, Virginia, Mt. Morris, Illinois, Thayer, Nebraska, Elk Horn, Iowa, McPherson, Kansas, Moscow, Kansas, Liberal, Kansas, and Blue Eye, Missouri. His high school years were spent at Beatrice, Nebraska, Lincoln, Nebraska, Kinross High School near South English, Iowa, McPherson, Kansas and he graduated from Adel, Iowa. In 1954 he entered McPherson College as an industrial arts major but after taking several courses with Dr. Raymond Flory history/government became his major and his first professional love with industrial arts a close second. While at McPherson College he met Helen Joan Ford and they were married on August 25, 1957. They had three children Helen Rachel, Harold Lane and Hope Elizabeth. After graduating in 1958 Herb’s first job teaching at Thayer High School in Thayer, Nebraska where he organized an Industrial Arts Department. After two years at Thayer he went to Elk Horn High School in Elk Horn, Iowa where he organized a district wide Library/Media program and a High School Industrial Arts program. In 1970 Herb earned his Master's degree at Southern Illinois University in Carbondale and was called to McPherson College to organize an Educational Media program for the college in Miller Library. While at the college he also started an Audio Visual Communications Department/program. In 1988 he went to Moscow High School in Moscow, Kansas where he was instrumental in the organization of a District Library/Media and Computer Program. Herb loved education and small schools. He also loved to organize new programs for those students. Some of those programs were “before their time” but they always seemed to be well received by his students. In 1998 he was granted early retirement by the Moscow school district. Then he and Joan moved to Blue Eye, Missouri near Branson. Herb had many interests hunting, fishing, collecting, travel in the United States, and architectural design. He was a student of several Native American tribes including the Mississippian Mound Builders, the American Civil War, the Trans-Mississippi West and World War II. His many interests led one of the superintendents that he served under to refer to him as “my shortstop “. Herb often said “I’ve done everything except teach home economics and girls physical education”. After Joan’s passing in 1999 he spent much time fishing, reading and the pursuit of family history and genealogy. In 2010 he returned to McPherson. Herbert Laverne Johnson, 85, of McPherson, Kansas, passed away at 3:53 a.m., Friday, August 6th, 2021 while in the company of family members, at Cedars Health Care Center. Herb wrote, “Remember, if you are a Christian, death is just another journey and I love to travel”. He was preceded in death by his parents, Harold and Lorene Johnson; and his wife Joan Johnson. He is survived by his children, H. Rachel and Dr. Russ McCaulley of Great Bend, Kansas, Harold and Lori Johnson of Wichita, Kansas, and Hope and Bob Mason of Lenexa, Kansas; his brother, Lee Johnson of Blue Eye, Missouri; five grandchildren, Dr. Dani McCaulley, Scott McCaulley, Joshua Thayer, Jennifer Wyant and husband Clay, and Jessica Smith and husband Tim; five great-grandchildren, Jack, Lucas, Hunter, Ember, Connor and one on the way; other relatives, students, and a host of friends. Visitation will be held on Friday August 13, 2021 , 2021 from 6 p.m. to 8 p.m. at the Glidden - Ediger Chapel, McPherson, Kansas. Masks are requested. Funeral service will be held on Saturday, August 14, 2021 at 10:00 a.m. at The McPherson Church of the Brethren with Pastor's Kathryn and Chris Whitacre officiating. Masks are requested. The service will be live streamed by going to this link below: https://youtu.be/alC97FK5dFI Memorials are suggested to the McPherson Church of the Brethren for the Audio Visual Fund in memory of Herb and they can be sent in care of the Glidden - Ediger Funeral Home; 222 West Euclid; McPherson, Kansas 67460.

The family of Herbert L. Johnson created this Life Tributes page to make it easy to share your memories.