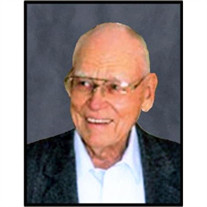 Howard Clinton Hopkins, 91, of McPherson, Kansas, passed away at 6:40 a.m., Thursday, September 10th, 2015 peacefully, at McPherson Hospital. Howard was born in McPherson, Kansas on May 21, 1924, a son of Hannah Elizabeth (Larson) and Clinton Bowen Hopkins.Howard attended McPherson grade schools, McPherson Junior High and High School, and he left school to enlist in the United States Navy after the attack on Pearl Harbor. He was a member of First United Methodist Church McPherson, Kansas. Howard honorably served in the U.S. Navy as a 1st Class Gunners Mate during WW II in the Pacific Theater. Howard owned and operated Hopkins Floor Coverings from 1961 until his retirement in 1989. He was a member of the Masonic Lodge, Isis Shrine, American Legion Post 24, Veterans of Foreign Wars Post 2715, Ducks Unlimited, and the Elks Club. Howard enjoyed his family, spending time at their lake home, and his love for carpentry and hunting. Howard was married to Caroline West on March 10, 1946 at Washington, D.C. She died on May 17, 1989. Howard was united in marriage to June Alice Cooper on May 9, 1992 at McPherson, Kansas. She died on April 3, 2007. Howard is survived by his daughter, Bonnie Hopkins, of McPherson, Kansas; his son-in-law, Rev. Kris Brinlee and his wife Jean, of Lyona, Kansas; his daughter-in-law, Sheila Hopkins, of McPherson, Kansas; his step children, Carol Kent, of Lakeland, Florida, Cris Polkinhorn and her husband Gary, of Reno, Nevada; Jim Fike, of Oklahoma, Bob Cooper, of Oklahoma, and John Cooper, of Kansas; several step-grandchildren; other relatives and a host of friends.Howard was preceded in death by his parents, wives, Caroline and June; his daughter, Peggy A. Brinlee, his son Glenn Howard Hopkins. his brother, Willard Hopkins, and his sister, Marjorie Hopkins. Friends are invited to call on Sunday, September 13, 2015 from 2 to 4 p.m. at Glidden - Ediger Chapel, McPherson. The funeral service will be held at Glidden - Ediger Chapel, McPherson, Kansas, at 10:30 a.m. on Monday, September 14th, 2015 with Reverend Kris Brinlee and Reverend Harold Nelson officiating. The final resting Place will be at the McPherson Cemetery, McPherson, Kansas. Military honors will be presented by members of the American Legion Post 24 and Veterans of Foreign Wars Post 2715 both of McPherson. In lieu of flowers, memorial contributions may be made to First United Methodist Church or the McPherson Shrine Children's Fund in memory of Howard, and they can be sent in care of the Glidden - Ediger Funeral Home; 222 West Euclid Street; McPherson, Kansas 67460.

The family of Howard Clinton Hopkins created this Life Tributes page to make it easy to share your memories.

Send flowers to the Hopkins family.