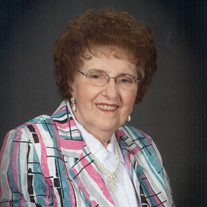 Ilene Alice Fuller, 85, of McPherson, Kansas, passed away at 6:46 a.m., Friday, April 6th, 2018 while in the company of family, at McPherson Hospital. Ilene was born in Miltonvale, Kansas on May 22, 1932, a daughter of Lena Catherine (Magaw) and John George Wehking Sr. Ilene attended Miltonvale grade school and graduated from Miltonvale High School in 1950. She was active in the First United Methodist Church McPherson, where she was a member of the Barbara Circle. Ilene started her work with Boyd Oil Company in Concordia, Kansas as a Bookkeeper. Bob and Ilene moved to McPherson in 1970. She started working for Stanley's Fashions as a clerk until they closed, she then worked for Farmers Alliance Insurance Company in the filing department until her retirement. She worked part time for the Christian Book Store and U.S.D. 418 McPherson School District serving lunches at Roosevelt School. Ilene enjoyed spending time with her family and grandchildren, attending Church, and playing cards with her friends at the Cedars. Ilene Alice Wehking was united in marriage to Robert Lee "Bob" Fuller on June 13, 1954 at Miltonvale, Kansas. The young couple established their first home together in Concordia. This union was blessed with the birth of a daughter Kari. She is survived by her daughter, Kari Kresky and husband Dana, of McPherson, Kansas; her brothers, John George Wehking, Jr. and wife Pam, of San Diego, California and Gilbert Wehking and wife Margaret, of Milwaukee, Wisconsin; her two grandsons, Jacob Kresky and Connor Kresky. Ilene was preceded in death by her parents, her husband Robert "Bob" Fuller, her son, Lee Alan Fuller, her sisters, Sophia Emma Wehking and Ruth Davidson; and a brother, Harvey Wehking. Visitation will be held on Wednesday, April 11, 2018 from 6 to 8 p.m. at Glidden - Ediger Chapel. The funeral service will be held at the First United Methodist Church, McPherson, Kansas, at 10:30 a.m. on Thursday, April 12th, 2018 with Reverend Karen Rice-Ratzlaff and Reverend Darren Frazier officiating. Burial will be held in the McPherson Cemetery McPherson, Kansas. In lieu of flowers, memorial contributions may be made to First United Methodist Church and they can be sent to Glidden - Ediger Funeral Home; 222 West Euclid Street; McPherson, Kansas 67460.

Ilene Alice Fuller, 85, of McPherson, Kansas, passed away at 6:46 a.m., Friday, April 6th, 2018 while in the company of family, at McPherson Hospital. Ilene was born in Miltonvale, Kansas on May 22, 1932, a daughter of Lena Catherine (Magaw)... View Obituary & Service Information

The family of Ilene Alice Fuller created this Life Tributes page to make it easy to share your memories.

Ilene Alice Fuller, 85, of McPherson, Kansas, passed away at...

Send flowers to the Fuller family.