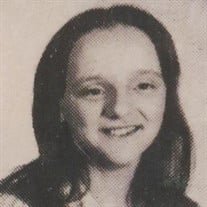 Iona lived a short 59 years, mostly in McPherson. She was a homebody who loved spending time with her family. She did enjoy going out to breakfast at her favorite places which changed over time as McPherson changed. She particularly enjoyed going to Mr. B’s with her daughter, Samantha, and granddaughter, Talya. She didn’t have many hobbies, but was fond of collecting things, particularly angels. While she could be blunt and opinionated, she also had a soft side. A fierce protector of her loved ones, she had a big heart but was quick to put someone in their place when needed. She loved her family and friends, but had a special fondness for animals, often saying she liked them more than most people. She didn’t have much but when someone was in need, she did what she could to help. Iona is loved and will be missed by her friends and family. Her circle wasn’t large, but it was special. She had a particularly close relationship with her granddaughter, Talya. Talya was the light of Iona’s life and they spent many hours enjoying each other’s company. Learning, playing, creating, and just being. For the last year she struggled with lung, and then brain cancer. She fought hard, and it looked like things were getting better. Apparently, the universe had different plans. Her body became too weak to handle the harshness of the chemotherapy and radiation treatments, but still she fought. She continued the battle until March 28, 2021 at 11:53 PM when she departed this transitory life. The family that was able said their goodbyes that afternoon and are grateful for the gift of being able to do so. Iona was born at her grandmother’s home in St. Joseph, MO to Norman Sr. and Martha Clark. The family moved around quite a bit in the early years. Mainly between Missouri and Kansas. In 1978 they moved to a farm in Arkansas. Iona had said that was the most treasured time in her early life. In 1981, the family moved to Galva, KS where Iona met her first husband, Dennis Snow Jr. Two children were born of this union. The whole family settled in McPherson in 1984. Iona met her second husband, William Wille, in 1990 and they had one son. She’s lived in McPherson with husband Sean Meyer since 2009. Iona is survived by: husband, Sean Meyer of McPherson; children, Dennis Wille, Samantha Williams and husband Greg, and Bryan Wille all of McPherson; three grandchildren; brothers, Larry Clark of Hot Springs, AR, David Clark of Moundridge, and sister Tammy Johnson of McPherson; nieces Jennifer Clark, Jasmine Meyer, Jessica Meyer, Amber Clark, Kimberly Harrison, and Brigid Johnson all of McPherson; nephew Justin Clark of McPherson; and many more extended family and friends. She was preceded in death by her parents and brother, Norman Clark Jr. Visitation for Family and friends will be Saturday, April 3, 2021 from 3 p.m. to 4 p.m. at Glidden - Ediger Funeral Home, McPherson, Kansas. A Celebration of Life will be held at a later date. Memorials are suggested to the Iona M. Clark Memorial Fund and they can be sent in care of the Glidden - Ediger Funeral Home; 222 West Euclid Street; McPherson, Kansas 67460.

Iona lived a short 59 years, mostly in McPherson. She was a homebody who loved spending time with her family. She did enjoy going out to breakfast at her favorite places which changed over time as McPherson changed. She particularly enjoyed... View Obituary & Service Information

The family of Iona Marie Clark created this Life Tributes page to make it easy to share your memories.

Iona lived a short 59 years, mostly in McPherson. She was a homebody...

Send flowers to the Clark family.