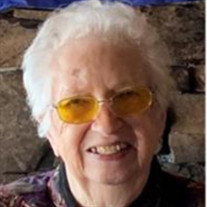 Irma Ruth Beery Giles Howell passed away October 5, 2021 at McPherson Hospital in McPherson, Kansas just weeks before reaching age 97. She had been a resident of The Cedars in McPherson for more than 20 years and was a McPherson College Class of 1949 graduate. She was born in Lintner, Illinois October 28, 1924 to Lester and Bertha (Cripe) Beery and graduated from Cerro Gordo (IL) High School in 1942. She married William (Bill) Giles in 1947 while they were attending McPherson College, then spent most of their working years in and around Peoria, Illinois, retiring fully in 2000 at The Cedars Independent Living in McPherson. She was the last of her generation having been preceded in death by brother Everett and sisters Iva and Leona (Petcher). Also preceding her in death were husband Bill (2001), son Gary of Elbing KS (2010), and granddaughter Jessica Stevenson (2016) of McPherson. Surviving are Gary’s widow Sandy Giles (Brewer), Merle (Erika) Giles of Mahomet IL, Marianne Peeples of Phoenix AZ, and Marcia Stevenson of Montreal MO, along with 13 grandchildren, 30 great-grandchildren and 2 great-great-grandchildren. Ruth survived her second husband Weldon Howell who passed in 2012. Surviving are step-children Veneta (Paul) Ediger of McPherson, Nolan (JoAnn Reed) Howell of McPherson, Norman (Mei-Feng) Howell of Fremont CA and Janice (Terry) Wokaty of Jacksonville AR, 10 grandchildren, 18 great-grandchildren and 6 great-great grandchildren. Ruth taught public elementary school for 26 years, including 3 years in a one-room country school near Cerro-Gordo IL. She sang in the McPherson College choir as well as in church choirs well past age 90. She taught piano lessons for 15 years following retirement and ran a bed-and-breakfast for 15 years. She was active on the leadership board at her home Church of the Brethren in Peoria and was once the IL/WIS District Moderator. She earned a graduate degree in music theory post-retirement from Bradley University. She was known to play piano regularly at The Cedars and most recently played from memory for her family just days before passing. A memorial service will be held at 11:00 am Saturday, November 20, 2021 at the McPherson Church of the Brethren, with Rev. Kathryn Whitacre and Rev. Chris Whitacre officiating. The service will be Linked for the stream at: https://youtu.be/5Ic2JOb7U8o Internment of her cremains will be at the McPherson Cemetery. Memorials in memory of Ruth may be made to McPherson Church of the Brethren where Ruth and Bill were members and where she and Weldon met. They can be sent to Glidden - Ediger Funeral Home; 222 West Euclid St.; McPherson, Kansas 67460.

Irma Ruth Beery Giles Howell passed away October 5, 2021 at McPherson Hospital in McPherson, Kansas just weeks before reaching age 97. She had been a resident of The Cedars in McPherson for more than 20 years and was a McPherson College Class... View Obituary & Service Information

The family of Irma Ruth Howell created this Life Tributes page to make it easy to share your memories.

Send flowers to the Howell family.