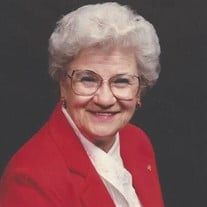 Marjorie "Marge" Towle, 101, of Albuquerque, NM, passed away at 11:23 a.m. Mountain Time, Monday, October 21st, 2019 peacefully, at Genesis at Bear Canyon, Albuquerque, New Mexico. Marge was born in Leonardville, Kansas on October 30, 1917, a daughter of Mabel Maud (Colt) and Charles Johnston. Marge attended the Leonardville, Kansas public schools and graduated from Leonardville Rural High School in 1935. She was a member of First United Methodist Church McPherson, Kansas where she was a member of the Mary Martha Circle. Marge was a homemaker and was in charge of the commercial and business appraisals for McPherson County in the Appraisers Office at the McPherson County Court House for 17 years prior to her retirement. Marge was a member of the American Legion Ladies Auxiliary, Memorial Hospital Auxiliary both of McPherson, Kansas. Marjorie Johnston was united in marriage to Fred E. Towle on September 28, 1937 at Colby, Kansas. Fred died on January 13, 1982. She is survived by her children, Enid "Raine" Towle Pinero and husband Edward, and Jerry Towle and wife Ally, both of Albuquerque, New Mexico; her sister-in-law, Mable Watson and husband Jim, of Brooksville, Florida; her three grandchildren, Randy Premer, of McPherson, Kansas, Roni Renee Premer Hernandez and husband Michael, and Andre Towle, both of Albuquerque, New Mexico; many great grandchildren; several nieces and nephews, other relatives and a host of friends. Marge was preceded in death by her parents, her husband Fred, , her sister, Hazel Johnston Foley, and her brother, Charles Wright Johnston; her sister in law, Frankie Joe Sjolender; and a granddaughter-in-law, Paula Premer. Memorial service will be held at 4:00 p.m., on Monday, November 4, 2019 at the First United Methodist Church, McPherson, Kansas, with Reverend Emily Cannon officiating. Inurnment of cremated remains will be in the Crestwood Memorial Park Cemetery rural McPherson, KS. In lieu of flowers, memorial contributions may be made to Friendship Meals McPherson, Kansas, or First United Methodist Church and they can be sent in care of the Glidden - Ediger Funeral Home; 222 West Euclid Street; McPherson, Kansas 67460.

The family of J.J. Marjorie Towle created this Life Tributes page to make it easy to share your memories.

Send flowers to the Towle family.