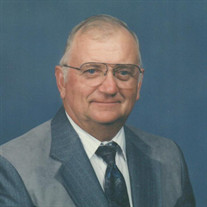 James C. Bornholdt, 82, of Inman, Kansas, passed away at 10:52 p.m., Saturday, September 12th, 2020 while in the company of family members, at Cedars House, McPherson. James was born in Hutchinson, KS on September 18, 1937, son of Mildred Emma (Knackstedt) and Harry Henry Bornholdt. James attended Grove School, rural Inman, Kansas and graduated from Inman High School, Inman, Kansas in 1955. James C. Bornholdt was united in marriage to Elizabeth Joan Murphy on May 3, 1959 in Inman, Kansas. The young couple established their first home together on the Bornholdt family farm just Northwest of Inman. This union was blessed with the birth of two children, a daughter and a son, Pat and Tim. Joan entered into eternal life on June 19, 2008. He was a member of St. Peter's United Church of Christ Inman, Kansas where he served in many capacities through the years and was an Elder of the church and a member of the Men's Fellowship. James was a lifelong cattleman and farmer and was blessed with taking over and maintaining the family farm. Through the years he also worked for Buhler Mills, McPherson Sale Barn, Central Livestock, and hauled cattle for Charlie Crow. James was a member of Kansas Livestock Association, Young Farmers Association, and Hayes Township Board Member. James enjoyed his livestock and took pride in his cattle. He and Joan enjoyed going on many trips, especially the Go Club trips, and spending time with his family. He was very proud of his grandchildren and great-grandchildren always looking forward to the times they shared together and telling stories around the dinner table. He is survived by his children, Pat Conklin and husband Paul, of Argonia, Kansas and Tim Bornholdt and wife Terri, of Inman, Kansas; his four grandchildren, Lynette Osner and husband Brandon, Cody Bornholdt and wife Ashley, Katie Albers and husband Adam, and Lance Conklin and wife Janelle; five great-grandchildren, Henry Osner, Blake Osner, Emma Osner, Jack James Osner, and Cash Albers; several nieces and nephews, other relatives and a host of friends. James was preceded in death by his parents, Harry and Mildred Bornholdt; his wife, Joan Bornholdt; and his sister Phyllis Luty. Visitation will be held on Wednesday, September 16, 2020 from 5 p.m. to 8 p.m. with family present from 6 p.m. to 8 p.m. at St. Peter's United Church of Christ Fellowship Hall, Inman, Kansas. Funeral service will be held at St. Peter's United Church of Christ, Inman, KS, at 10:00 a.m. on Thursday, September 17th, 2020 with Reverend Dennis Ureche officiating. The final resting place will be at the North Inman Cemetery Inman, KS. In lieu of flowers, memorial contributions may be made to St. Peter's United Church of Christ or Kindred Hospice in memory of James and they can be sent in care of the Glidden - Ediger Funeral Home; 222 West Euclid Street; McPherson, Kansas 67460.

James C. Bornholdt, 82, of Inman, Kansas, passed away at 10:52 p.m., Saturday, September 12th, 2020 while in the company of family members, at Cedars House, McPherson. James was born in Hutchinson, KS on September 18, 1937, son of Mildred... View Obituary & Service Information

The family of James C. Bornholdt created this Life Tributes page to make it easy to share your memories.

Send flowers to the Bornholdt family.