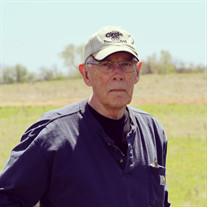 On Wednesday April 14th Jim Boyer (78) passed away. He was a devoted husband, father, and friend. He met the love of his life Edee (Hansen) in high school. They have been the model for a loving, supportive marriage. Without a doubt, the greatest gift he gave to his three kids and his six “grands” was the profound love he had for their mom/NaNa. Jim is survived by his wife of 57 years and their three children and six grandchildren: Bret and wife Kristin, daughter Joslyn (of Round Rock, TX) Jason and wife Dana, sons Hunter, Brodie (of Meriden, KS) Jamie Hicks and husband Ryan, daughter Allie, sons Colson, Cooper (of McPherson) When asked to describe their Papa in one word, each grandchild provided a perfect aspect of who their Papa was: Hunter (21) said “Teacher” Allie (20) said “Adventurist” Colson (17) said “Stoic” Joslyn (16) said “Protector” Brodie (14) said “Wholesome” Cooper (10) said “Nice” Jim truly lived an extraordinary life. A Christian and a life-long student of the Bible, Jim had many interests, and he approached each with a laser focus. He worked in Idaho and Utah for the U.S. Forest Service in the summers from the time he was 17 through 24. He fought forest fires, worked on trail maintenance and fell in love with the mountains and hiking. While in Idaho, he started the first youth baseball team for the town of Clark Fork, Idaho. He grew up in Sioux City, Iowa, graduating from East High School, having played on an exceptional basketball team that is still remembered to this day. He continued to play basketball at Wayne State College and Morningside College, where he earned a degree in education. He attended graduate school at the University of Utah, after which he taught history, economics and government at LeMars High School in Iowa, while also writing curriculum for the American government classes and coaching the varsity boys’ basketball team. During the summers, he worked with the Youth Conservation Corps, sharing his love for the out-of-doors with teenagers. In 1979, he, Edee, and their young family moved to McPherson as the owners of Culligan Water Conditioning, the business he and Edee ran together for more than 20 years. When they sold their successful business in 1999, Jim worked for Culligan International, traveling the southwest quarter of the United States before retiring. Jim’s commitment to civic responsibility and engagement continued into his retirement. After leaving Culligan, he took the classes and certification to become a “master gardener” through Kansas State University’s extension program. He helped start a demonstration garden in McPherson with the McPherson Master Gardeners and Friends. He and Edee loved gardening and giving away produce to family and friends. He worked hard with the city of McPherson to help put in better sidewalks so kids would be safer as they walked and rode bikes to school. He also volunteered much of his time to help others, most recently with Meals on Wheels. In addition, he was very involved as a long-time member of the McPherson United Methodist Church. He volunteered countless hours, taught Sunday school, and served on many committees. Throughout his life, Jim’s love for adventure was equally matched by his love for a solid nap. He approached both with full commitment. In fact, commitment was a hallmark feature. He never met a task or a project he couldn’t map out, organize and tackle. Other hallmarks have become legacies given to his children: He had a gift for fixing what was broken and that was passed on to his oldest son. He had a ferocious desire to protect that he passed on to his middle son. And he had an unlimited love for processes that he passed on to his youngest daughter. He had a fantastic sense of humor that was evident in his easy smile and deep laugh, and he passed on his sense of humor to each of his children in equal measure. He never grew weary of spending time listening to stories and laughing with friends and family, sitting with a newspaper in his hands, listening to music or drinking tea. Anyone who knew Jim is better for having met him. He will be forever loved, cherished and carried in our hearts and memories. A Celebration of Life will be held at a later date. Memorials in memory of Jim are suggested to Kindred Hospice or the Moundridge Manor and they can be sent in care of the Glidden - Ediger Funeral Home; 222 West Euclid; McPherson, Kansas 67460

On Wednesday April 14th Jim Boyer (78) passed away. He was a devoted husband, father, and friend. He met the love of his life Edee (Hansen) in high school. They have been the model for a loving, supportive marriage. Without a doubt, the greatest... View Obituary & Service Information

The family of James "Jim" Boyer created this Life Tributes page to make it easy to share your memories.

Send flowers to the Boyer family.