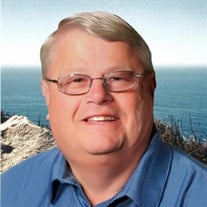 James Lee Engweiler, 72, of McPherson, Kansas, passed away at 7:28 p.m., Tuesday, June 23rd, 2020 while in the company of family members, at Salina Regional Health Center, Salina, Kansas. Lee was born in Hutchinson, Kansas on July 24, 1947, a son of Alice Joan (Popp) Engweiler and James Frederick Engweiler. Lee attended Haven grade school and graduated from Haven High School, Haven, Kansas in 1965. He then attended Washburn University, Topeka, Kansas. He was a member of First United Methodist Church Haven, Kansas. Through the years Lee worked as a tool designer for Cessna in Seattle, Washington and for Boeing in Wichita, Kansas. He then began working for Haven Ford as a salesman, Finnin Ford in Dubuque, Iowa, came back to Haven for a few years prior to moving to McPherson and working for Lacy - Regehr Motors as the sales manager. Lee stayed on when it became Midway Motors and he retired in 2018 after 50 years working for Ford. Lee was a member of the Jay Cee's, and a volunteer EMT and Fire both of Haven, Kansas. Lee enjoyed life, his grandkids, cars, sports especially football, traveling to Santa Fe, New Mexico and Surprise, Arizona. James Lee Engweiler was united in marriage to Marsha Jeanne McNew on April 4, 1965 at Marsha's parents house, Hutchinson, Kansas. The young couple established their first home together in Haven, Kansas. This union was blessed with the birth of three children, one son and two daughters, Craig, Debi, and Keli. Lee was united in marriage to Kathleen Rose Herman-Taylor on August 25, 1988 at Wichita, Kansas. The couple established their first home together in McPherson, Kansas. This union brought Kathy's two children, a son and a daughter, Todd and Marnie. He is survived by his loving and devoted wife of over 31 years, Kathy Engweiler, of McPherson, Kansas; his children, Craig Engweiler and wife Annette, of Hutchinson, Kansas, Debi Adelhardt and husband Dan, of Wichita, Kansas, Keli Reed, of Hutchinson, Kansas, Todd Taylor, of Goddard, Kansas, and Marnie Powell and husband, Corey, of Abilene, Kansas; his sisters, Linda Luyster and husband George, of Sterling, Kansas, and Mary Miles and husband Jon, of Pella, Iowa; his nine grandchildren, Tanner Engweiler and fiance' Layne Gilliand, Katlyn Keen and husband Zach, Macy Engweiler and fiance' Jaziel Guerrero, Reed Adelhardt, Trey Gardner, Treston Dalrymple, Drew Taylor, Caden Powell, and Callie Powell; his three great-grandchildren, Coy Keen, Andi Keen and Corbin Casanova; several nieces and nephews, other relatives and a host of friends. Lee was preceded in death by his parents. Jim Engweiler and Joan Kelley. A Celebration of Life and come and go will be held on Sunday, July 19, 2020 from 2 to 4 p.m. at Glidden - Ediger Chapel, McPherson, Kansas. In lieu of flowers, memorial contributions may be made to the Mac to Mac and they can be sent to Glidden-Ediger Funeral Home; 222 W. Euclid; McPherson, Kansas 67460.

The family of James Lee Engweiler created this Life Tributes page to make it easy to share your memories.

James Lee Engweiler, 72, of McPherson, Kansas, passed away at...

Send flowers to the Engweiler family.