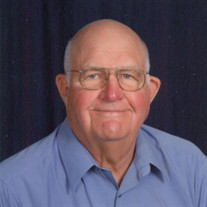 James Edward "Jim" Rempe, 79, of McPherson, Kansas passed away on Monday, February 18, 2019 at the Cedars House, McPherson. James was born in Plainville, Kansas on May 7, 1939, a son of Mary Josephine (Hoff) and Ernest J. Rempe. Jim attended Sacred Heart Catholic elementary school in Plainville and graduated from Plainville High School in 1957. He then attended and graduated from Kansas State University, Manhattan, Kansas with a degree in Feed Technology in 1961. Jim enjoyed fishing, going out on the lake on his pontoon, hunting, vacations with his family, dancing, playing cards and dominoes, reading, watching K-State sports, KC Royals and KC Chiefs. After he retired he built a workshop and spent many hours making end tables, desks, jewelry boxes, toys for the grandchildren, etc. But most of all he enjoyed his family taking great pride in his children and grandchildren. He was a member of St. Joseph's Catholic Church McPherson, and over the years he was active serving as Lector, Eucharist Minister, on Parish Council, teaching high school CCD classes and singing in the choir. After graduation Jim started his career by working for Naturich Flour Milling in Abilene, Kansas for 1 year. He and his wife moved to Humboldt, Nebraska where Jim worked for O.A. Cooper Co. as a Production Coordinator and Project Engineer for 18 years. Due to the sale of this company, Jim became the Executive Vice President and General Manager of MFA in Springfield, Missouri. In 1982 MFA was consolidated so Jim moved to ACCO Feeds in Abilene, Texas. In 1988 Cargill purchased ACCO Feeds and Jim was moved to Cargill's corporate office in Minnetonka, Minnesota. In 1995, he and his wife moved to McPherson, Kansas where Jim worked at the Cargill Nutrena mill until retiring in 1997. Jim belonged to Phi Kappa Theta Fraternity at K-State, Knights of Columbus, Lions Club, Boy Scouts and AFIA where he held various positions including chairman in 1980-1981. He taught short courses at Kansas State and Texas Tech University and received an Outstanding Service Award from Kansas State Grain Science division in April 2011 in appreciation of his service. Jim Rempe was united in marriage to Lou Anna Swoboda on June 2, 1962 at St. John's Catholic Church in Hanover, Kansas. The young couple established their first home together in Abilene, Kansas. This union was blessed with the birth of five children, three sons and two daughters, Jay, Rebecca, David, Elizabeth, and Stephen. He is survived by his loving wife of over 56 years, Lou Anna Rempe, of McPherson, Kansas; his children, Jay Rempe and wife Jan, of Lincoln, Nebraska, Becky Reimer and husband Steve, of Dallas, Texas, David Rempe and wife Estelle, of Webster Groves, Missouri, Beth Jones and husband Von, of Boerne, Texas, and Steve Rempe and wife Joanne, of Plymouth, Minnesota; his siblings, Eugene Rempe and wife Charlotte, of Geneva, Illinois, Theresa Jones and husband Bill, of Norman, Oklahoma; his 14 grandchildren, Davis, Maggie, and Jackson Rempe, Sam and Max Reimer, Wildes, James, Thomas, and Henry Rempe, Varon, Luke, and Corrin Jones, Katelyn and Ben Rempe; many nieces and nephews, other relatives and a host of friends. Jim was preceded in death by his parents, his brothers, Joe Rempe, and Paul Rempe and sisters, Mary Ruth McCune and Rita Brand. Visitation will be held on Friday, February 22, 2019 from 5:30 p.m. to 7 p.m. with Rosary at 7:15 p.m. at St. Joseph's Catholic Church, McPherson, Kansas. A Mass of Christian Burial will be celebrated at 10:00 a.m. on Saturday, February 23, 2019 at St. Joseph's Catholic Church, McPherson, KS, with Fr. Ben Shockey officiating. Final resting place will be at the McPherson Cemetery, McPherson, Kansas. In lieu of flowers, memorial contributions may be made to St. Joseph's Catholic Church or the Kansas State Grain Science Department and they can be sent in care of the Glidden - Ediger Funeral Home; 222 West Euclid Street; McPherson, Kansas.

The family of James Edward Rempe created this Life Tributes page to make it easy to share your memories.

Send flowers to the Rempe family.