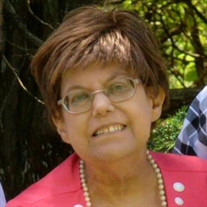 Janet Lou Johnson, 69, of McPherson, Kansas, passed away at 11:53 a.m., Saturday, April 4th, while in the company of family members, at her home. Janet was born in Lindsborg, Kansas on March 22, 1951, a daughter of Esther Adelia (Erickson) Ebling and Jack Walton Ebling. Janet attended Elvings Country School, near Lindsborg, Kansas and graduated from Lindsborg Rural High School, Lindsborg, Kansas in 1969. She then attended Brown Mackie Business School, Salina, Kansas where she received her Business Degree. She was a member of New Gottland Lutheran Church rural McPherson, where she was a member of WELCA and served her church in many other capacities. Janet worked for Colonial Savings in Salina, Kansas before her marriage. After her marriage, she worked for Pioneer Savings and Loan Company, worked for USD 418 as an aide and worked for Central Plastics in the shipping department. She was the New Gottland Lutheran Church secretary for about 20 years. Janet was also a homemaker and farmwife and she took great pride in providing for her family in this manner. Janet enjoyed sewing, cooking and baking, and spending time with her family especially her grandchildren. Janet Lou Ebling was united in marriage to Marvin W. Johnson on July 28, 1979 at Bethany Lutheran Church, Lindsborg, Kansas. The young couple established their first home together on the Johnson family farm rural McPherson. They were blessed with the birth of daughter, Jamie. . She is survived by her devoted husband of over 40 years, husband Marvin Johnson, of McPherson, Kansas; her daughter, Jamie Tautwein and husband Taner of Lindsborg, Kansas; her sister, Mary Jean Peterson and husband Eugene, of Lindsborg, Kansas; her sister-in-law, Caren Ebling, of Lindsborg, Kansas; her four favorite grandchildren, Adison Trautwein, Audrey Trautwein, Aspen Trautwein, and Ayvie Trautwein. Janet was preceded in death by her parents, her brother, Kent Ebling and her stepfather, Raymond "Pete" Elmquist. A Celebration of Life service will be held on Sunday, August 15, 2021 at 2:00 p.m. at the New Gottland Lutheran Church with Pastor Laura Smith officiating. Private family graveside service will be at the Elmwood Cemetery Lindsborg, KS. In lieu of flowers, memorial contributions may be made to New Gottland Lutheran Church or the McPherson Relay For Life and they can be sent in care of the Glidden - Ediger Funeral Home; 222 West Euclid Street; McPherson, Kansas 67460.

Janet Lou Johnson, 69, of McPherson, Kansas, passed away at 11:53 a.m., Saturday, April 4th, while in the company of family members, at her home. Janet was born in Lindsborg, Kansas on March 22, 1951, a daughter of Esther Adelia (Erickson)... View Obituary & Service Information

The family of Janet L. Johnson created this Life Tributes page to make it easy to share your memories.