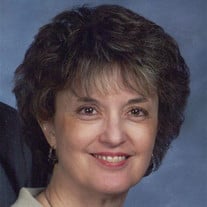 Jeanne Faye Stull, 68, of McPherson, KS, passed away at 4:35a.m., Wednesday, April 5th, while in the company of family members, at her home. Jeanne was born in Beaver, Oklahoma on August 21, 1948, a daughter of Doris Marie (Morehouse) and Charles Edward Landers. Jeanne attended the Bucklin grade schools, Bucklin, Kansas and graduated from Dodge City High School, Dodge City, Kansas in 1966. She then attended St. Mary's College, Dodge City, Kansas and graduated from Emporia State University, Emporia, Kansas with her degree in elementary teaching in 1969. In 1991 she received her Masters in Education from Kansas State University, Manhattan, Kansas. She was a member of First United Methodist Church, McPherson, KS. Jeanne was a homemaker and she took great pride in providing for her family. She taught 3rd and 4th grade for 30 years in Hutchinson, Wright, Dodge City, and McPherson, retiring in 2005. She then worked as a para-educator and substitute teacher for McPherson U.S.D. 418. She was co-owner and operator of Stull Gallery & Auction L.L.C. where she worked alongside her husband Keith Jeanne was a member of the National Teachers Association as well as the Kansas Teachers Association. As a dedicated parent, she volunteered as a bowling coach for Special Olympics for many years. Jeanne enjoyed family, reading, flower gardening, traveling, and watching sports. Jeanne Faye Landers was united in marriage to Richard Keith Stull on August 11, 2006 at McPherson, Kansas. Survived by her husband, Keith Stull, of McPherson, Kansas; her children, Michael Gunn, of Yoder, Kansas; David Gunn and his wife Danielle, of Burbank, California, and Mandy Gunn, of McPherson, Kansas; her step-daughter, Kelsi Richards and her husband Shane, of Salina, Kansas; her sisters, Marilyn Michaelis and her husband Larry, of Lyons, Kansas, and Stephanie Bruner and her husband Ernie, of Overland Park, Kansas; her 5 grandchildren - Ally Gunn, Emma Gunn, Lily Gunn, Elliott Gunn, Peter Gunn; her 4 step-grandchildren, Tate Richards, Ashton Richards, Mason Richards, and Nicole Richards; several nieces, other relatives, a host of friends and many students. Jeanne was preceded in death by her parents, Charles and Doris Landers. At the family's request there will be a Celebration of life and time of sharing at Glidden - Ediger Chapel, McPherson, KS, at 5-7 p.m. with a formal time of sharing starting at 6:30 p.m. on Monday, April 10th, 2017. In lieu of flowers, memorial contributions in memory of Jeanne are suggested to Disability Supports can be sent or given to Glidden-Ediger Funeral Home; 222 West Euclid Street, McPherson, Kansas 67460.

Jeanne Faye Stull, 68, of McPherson, KS, passed away at 4:35a.m., Wednesday, April 5th, while in the company of family members, at her home. Jeanne was born in Beaver, Oklahoma on August 21, 1948, a daughter of Doris Marie (Morehouse) and Charles... View Obituary & Service Information

The family of Jeanne Faye Stull created this Life Tributes page to make it easy to share your memories.

Send flowers to the Stull family.