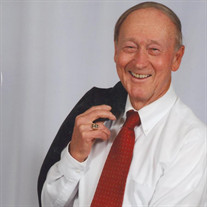 Jerome "Jerry" Francis Gasper, 82, of McPherson passed away on June 18, 2021 at his home. He was born on May 29, 1939 to Herman N. and Anna M. (Reinert) Gasper in Tipton, Kansas. He was the oldest of two children born to this union, the older brother of LaVerne. He attended Tipton Catholic School in Tipton, Kansas and graduated from St. Boniface High School, Tipton, Kansas in 1957. Jerry was united in marriage to Doralie Sue Holling on February 4, 1961 at St. Boniface Catholic Church in Tipton, Kansas. The young couple established their first home together in Tipton, Kansas. This union was blessed with the birth of three children, James, Pamela and Susanne. Doralie passed away on January 2, 1995. During the early years of marriage, Jerry worked at Kent Manufacturing in Tipton, Kansas. While working on a crew building bridges in McPherson, Kansas area, he felt this would be a good town to settle and raise their young family. Upon arriving in McPherson, he worked in construction building houses for Harris Development, While working there he met many lifelong friends. This is where he developed his construction skills. This love of carpentry and working with his hands was evident when he constructed his own family's home and his son's home. His carpentry skills can be found in numerous projects in the McPherson area. He never met a project that was to tough to tackle. He could envision and create a project easily in his mind from start to finish. In 1974, Jerry began working at Johns-Manville in the Maintenance department. He retired as the maintenance superintendent in 2001. Jerry was united in marriage to Anna Ruth Knobloch on May 5, 1999 in McPherson, Kansas. Anna died on July 10, 2002. Jerry was a life long devoted Catholic, a loving and caring husband, father, grandfather, great-grandfather, brother, co-worker and dear friend. Jerry enjoyed having coffee with his buddies in the mornings and afternoons. He was a member of the American Legion. He loved everything KU. He enjoyed attending KU basketball games with his family. For many years, Jerry took his KU buddies to the Williams Fund Roundball Luncheon. At holidays, he always displayed his impression of Jayhawk basketball players dunking in the front driveway. To further show his athletic abilities, he was also known to occasionally hurdle over a church pew. In slow-pitch softball days, he was known as "Brooks Robinson" for his errorless plays at shortstop. He was known as "Coach Jerry" to many kids who played baseball and softball for him. He enjoyed any opportunity to watch his children and grandchildren participate in sports. Jerry was preceded in death by his parents, Herman and Anna Gasper; his brother, LaVerne. He is survived by his children, James and wife Tomi of McPherson, Kansas; Pam Tallant and husband Doug of Pretty Prairie, Kansas; Sue Boston and husband Mike of Newton, Kansas; special frien Pat Bledsoe of McPherson, Kansas; his eight grandchildren, Amber Slater(Blake), Crystal Reinecker(Jeff), Breanna Tallant, Trey Tallant(Ashley), Meghan Boston, Erin Boston, Sean Boston and Katelyn Boston; his four great-grandchildren, Warren and Gavin Slater, Reagan Reinecker and Mikey Boston. Those who knew Jerry will agree with his special friend, Pat Bledsoe, that he will be remembered for the twinkle in his eye, his ornery smile and his witty sense of humor. We are sure he is already looking for handyman projects in Heaven. Rock Chalk Jayhawk! Go KU! Visitation will be Sunday, June 27, 2021 from 2:00 p.m. to 3:45 at the St. Joseph's Catholic Church, McPherson, Kansas with Rosary starting 4:00 p.m. Mass of Christian Burial will be on Monday, June 28, 2021 at 10:00 a.m. at the St. Joseph's Catholic Church with Father Ben Shockey officiating. Burial will be held at the McPherson Cemetery, McPherson, Kansas. Memorials are to the St. Joseph's Catholic Church and they can be sent to Glidden-Ediger Funeral Home, 222 W. Euclid St., McPherson, Kansas 67460.

Jerome "Jerry" Francis Gasper, 82, of McPherson passed away on June 18, 2021 at his home. He was born on May 29, 1939 to Herman N. and Anna M. (Reinert) Gasper in Tipton, Kansas. He was the oldest of two children born to this union, the older... View Obituary & Service Information

The family of Jerome "Jerry" Francis Gasper created this Life Tributes page to make it easy to share your memories.

Jerome &quot;Jerry&quot; Francis Gasper, 82, of McPherson passed away on...

Send flowers to the Gasper family.