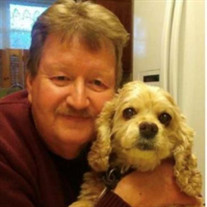 Jerry Dean Barber, 67, of McPherson, Kansas, passed away at 11:23 p.m., Friday, June 12th, 2020 while in the company of family members, at Hutchinson Regional Medical Center, Hutchinson, Kansas. Jerry was born in Jacksonville, Illinois on April 17, 1953, the eldest son of John Jerome and Mary Jane (Hughes) Barber. Jerry attended Washington and Jefferson grade schools, Jonathon Turner Junior High and graduated from Jacksonville High School, Jacksonville, Illinois in 1971. He then attended and graduated from Central Christian College of the Bible, Moberly, Missouri, with an Associates Degree in Bible studies and attended and graduated from Fort Hays State University, Hays, Kansas with a Bachelor's Degree in Psychology. Jerry was a former church member of the Ogallah Christian Church, Ogallah, Kansas, Plainville Christian Church, Plainville, Kansas, and the First Baptist Church of Jacksonville, Illinois where he was Baptized in 1966. Through the years Jerry worked as a supported living manager, case manager, job coach, family teacher and assistant family teacher for Developmental Services of NW Kansas. Jerry was certified as a family teacher for mentally challenged adults by the National Teaching-Family Association. Jerry loved to sing and travel. Jerry visited most of the 50 states in addition to Italy, China and Japan. He was always the life of the party and he loved to make people laugh. He was well thought of and loved by all. His greatest love was when he was able to be with his family and many friends. Jerry was known for his kindness to others. Jerry Dean Barber was united in marriage to Carla Marie Carlson on August 1, 1981 at Plainville, Kansas. The couple established their first home together in Hays, Kansas. They were blessed with a daughter, Angel. The family moved to McPherson, Kansas in 2005. He is survived by his loving and caring wife of over 38 years, Carla Barber, of McPherson, Kansas; his daughter, Angel Fast and her husband Tim, of Moundridge, Kansas; his siblings, David Barber and his wife Cindy, of Jacksonville, Illinois, Jackie Hamm-Sipley and husband Allen Sr., of Ogallala, Nebraska, and Judy Grissom and her significant other, Raymond Caminata, of Waukesha, Wisconsin; his brother-in-law, Vincent Carlson and wife Gayle, of Oberlin, Kansas; his sister-in-law, Brenda Dinger, of Clarksville, Indiana; his two favorite granddaughters, Amity Fast and Laylla McCleod; many nieces and nephews, other relatives and a host of friends. Jerry was preceded in death by his parents, John and Mary Barber; step-father, Paul Pronold; his sister Tracey Glodowski; mother & father-in-law, Gaynor & Helena Carlson and a brother-in-law, Eddie Brickey. The memorial service will be held at 1810 Gordon Street, McPherson, Kansas, on Saturday, September 5, 2020 at 7:30 p.m. with Professor Tom Bronleewe officiating. Visitation time and light refreshments after the service, social distancing will be observed, please respect others by wearing a mask. Family suggests casual dress. Burial will take place at the McPherson Cemetery McPherson, Kansas at a later date. In lieu of flowers, memorial contributions may be made to Ogallah Christian Church, Ogallah, Kansas and they can be sent to Glidden-Ediger Funeral Home; 222 West Euclid St., McPherson, Kansas 67460.

The family of Jerry Dean Barber created this Life Tributes page to make it easy to share your memories.

Send flowers to the Barber family.