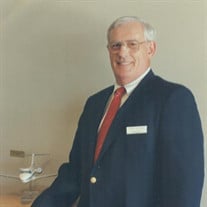 Jerry William Nelson, 81, of McPherson, Kansas, passed away at 9:17 a.m., Tuesday, January 21st, 2020 while in the company of family members, at Ascension Via Christi St. Francis , Wichita, Kansas. Jerry was born in Wichita, Kansas on March 6, 1938, a son of Mary Beatrice "Bea" (Kelly) and John Walker Nelson. Jerry attended a Wichita grade school, Lincoln grade school, McPherson Junior High and graduated from McPherson High School, McPherson, Kansas in 1956. He joined the Army National Guard at age of 18 while attending KU, Lawrence, Kansas. He was a member of First United Methodist Church McPherson, Kansas. Through the years Jerry worked for his dad at Groendyke Transport Company McPherson Terminal as assistant manager. He then served his Country in the United States Air Force flying the F100 during the Pueblo Crisis in Korea in 1968 thru 1969 and was released from active duty on the day of the Moon Landing. He remained an active member of the Air National Guard where he flew F-4 Phantoms and F-5 Thunderbirds and served as Commander of the Smokey Hill Gunnary Range until he retired as a Lt. Colonel. He flew for Orion Air, Emory Air Freight and then Ryan International Airlines for several years before becoming a Flight Simulator Instructor at Flight Safety International, Wichita, Kansas until his retirement at age 78. Jerry was a member of the American Legion Post 24, and National Guard Association. Jerry enjoyed, golfing, farming, flying since he was 16 when he received his pilots license, and loved his grandchildren, great-grandchildren and family very much. He also enjoyed his time outside, and with his horses and canine companions. Jerry William Nelson was united in marriage to Angela Susan Cassise on November 5, 1966 at St. Vincent DePaul Catholic Church in Phoenix, Arizona. The young couple established their first home together in McPherson while Jerry was stationed at McConnell Air Force Base. This union was blessed with two daughters, Jera and Shanna. He is survived by his loving and devoted wife of over fifty-three years, Angela Nelson, of McPherson, Kansas; his daughters, Jera Thompson and husband Ty, of Wichita, Kansas and Shanna Hoch and husband Scott, of Basehor, Kansas; his nine grandchildren, Colton Snyder and wife Cassie, Camden Snyder and wife Kady, Corynn Snyder and husband Tony Pitcher, Camille Snyder, Corbin Snyder, Crandall Snyder, Skylar Hoch and fiance' Gretchen Reed, Foster Hoch, and Thatcher Hoch; his seven great-grandchildren, Cade Snyder, Collin Snyder, Clasen Snyder, Kyla Snyder, Vincent Pitcher, Nicholas Pitcher, and Samuel Pitcher; his German Shepherds, Phantom and Hawker; other relatives and a host of friends. Jerry was preceded in death by his parents, John and Bea Nelson; his brother, Ralph "Gene" Nelson; his sister, Nancy Jo Guiot; and a niece, Susan Lynn "Suzi" Nelson. Visitation will be held on Sunday, January 26, 2020 from 2 p.m. to 4 p.m. at Glidden - Ediger Chapel, McPherson, Kansas. The funeral service will be held at the Glidden - Ediger Chapel, McPherson, Kansas, at 10:30 a.m. on Monday, January 27th, 2020 with Reverend Emily Cannon officiating. Burial will be at the McPherson Cemetery McPherson, KS with Military Honors presented by members of the 184th Wing Honor Guard. In lieu of flowers, memorial contributions may be made to American Lung Association and can be sent to Glidden-Ediger Funeral Home; 222 W. Euclid St., McPherson, Ks. 67460.

Jerry William Nelson, 81, of McPherson, Kansas, passed away at 9:17 a.m., Tuesday, January 21st, 2020 while in the company of family members, at Ascension Via Christi St. Francis , Wichita, Kansas. Jerry was born in Wichita, Kansas on March... View Obituary & Service Information

The family of Jerry William Nelson created this Life Tributes page to make it easy to share your memories.

Jerry William Nelson, 81, of McPherson, Kansas, passed away at...