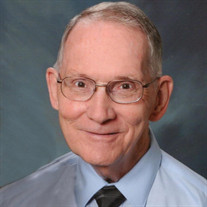 Jimmie L Koehn, 78, of McPherson, Kansas, passed away at 2:40 p.m., Saturday, April 11th, 2020 while in the company of family members, at McPherson Health And Rehab. Jimmie was born in Dodge City, Kansas on December 20, 1941, a son of Verna (Abrahams) and Ormand Koehn. Jim attended Grasshopper County School and Harmony Country School and graduated from Galva High School, Galva, Kansas in 1959. He later attended Insurance School where he received his Insurance License. He was a former member of First Mennonite Church McPherson and later transferred his membership to the New Hope Evangelical Church, McPherson, Kansas. Through the years, Jim worked as a salesman for Jantz - Kaufman John Deere and later as a salesman and insurance agent for Farmland Industry, both of McPherson, Kansas and was a self employed Insurance Agent. Jim enjoyed growing up on the farm, spending time out doors, playing sports, especially participating in Baseball and Basketball but loved to watch all sports, and spending time with his family. Jimmie Lee Koehn was united in marriage to Myreta Mae Jantz on October 7, 1960 at Emanuel Mennonite Church, rural Galva, Kansas. The young couple established their first home together in Indianapolis, Indiana until 1962 when they moved to Galva, Kansas. This union was blessed with three children, two sons and a daughter, Scott,Marcia, Zachary. In 1981 they moved to McPherson. He is survived by his loving and devoted wife of over fifty-nine years, Myreta Koehn, of McPherson, Kansas; his children, Scott Koehn and his wife Tammy, of McPherson, Kansas, Marcia Winters, of Seracy, Arkansas, and Zachary Koehn and wife Ariel, of McPherson, Kansas; his sisters, Judy Anderson and husband Royce, of McPherson, Kansas and Joyce Benning and her husband Craig, of Moundridge, Kansas; his two grandchildren, Stephane Pratt, Bryce Koehn; his six great-grandchildren, Brooklyn, Wyatt, Xvaier, Kaly, Merrick, and Makenna; several nieces and nephews, other relatives and friends. Jim was preceded in death by his parents; and his brother Jerry Koehn A Celebration of Life Service will be held once we get the all Clear from the COVID 19 Pandemic. Burial will be in the Emmanuel Bible Church Cemetery Galva, Kansas at a later date. Glidden - Ediger Funeral Home was in charge of arrangements.

Jimmie L Koehn, 78, of McPherson, Kansas, passed away at 2:40 p.m., Saturday, April 11th, 2020 while in the company of family members, at McPherson Health And Rehab. Jimmie was born in Dodge City, Kansas on December 20, 1941, a son of Verna... View Obituary & Service Information

The family of Jimmie L. Koehn created this Life Tributes page to make it easy to share your memories.