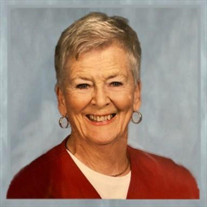 Jody Marie Dombaugh Miller, 88, of McPherson, Kansas, passed away peacefully at 11:01 a.m., Saturday, October 23rd, 2021 while in the company of family members at Hutchinson Regional Medical Center, Hutchinson, Kansas. Jody was born in Coldwater, Kansas on April 28, 1933, the daughter of Fred Clifford and Myrtle Marie (Atteberry) Clinesmith. Jody attended the Coldwater elementary schools and graduated from Coldwater High School in 1951. She then attended the Pratt Community College, Pratt, Kansas for one year. She was a member of First United Methodist Church in McPherson. Jody enjoyed her dogs, camping and traveling in her motor home, cooking, music, music theater, she loved her church family and loved spending time with her friends and family. Jody was a homemaker. Prior to her retirement she was a secretary for Flory and Karstetter Law Office and later was a secretary for Prairie View Mental Health Center, McPherson, Kansas. Jody was united in marriage to Darrell Neil Dombaugh on May 17, 1953 at the Methodist Church, Coldwater, Kansas. Darrell died on December 19, 2002. Jody was then married to Merlin J. Miller on August 18, 2008 in McPherson, Kansas. She is survived by her husband, Merlin Miller, of McPherson, Kansas; her daughter Dalyn Cantrell and husband Mark, of McPherson, Kansas; her two grandchildren, Casey Cantrell, of Austin, Texas and Cristen Cantrell, of Seattle Washington; her step children, Cheri Hudson and husband Neal, of Wasso, California, Kevin Miller and husband Herb Acevedo, of Provincetown, Massachusetts and Diane Patton and husband Jim, of Maize, Kansas and her step grandchildren, Colby Patton, of Oxford, Kansas, Riley Patton and Cara Hudson, of McPherson, Kansas. Jody was preceded in death by her parents, a brother Clifford Clinesmith, her husband Darrell Dombaugh and her son David Dombaugh. A memorial service will be held on November 22, 2021 at 10:00 am at First United Methodist Church, McPherson, Kansas, with Reverends Emily Cannon and Chris Whitacre officiating. Burial will be at the McPherson Cemetery, McPherson, Kansas. Memorial contributions may be made to First United Methodist Church or McPherson Animal Shelter and they can be sent to Glidden-Ediger Funeral Home; 222 W. Euclid St., McPherson, Ks. 67460.

The family of Jody Marie Dombaugh Miller created this Life Tributes page to make it easy to share your memories.