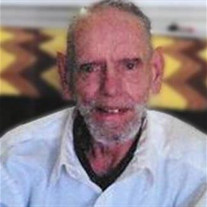 Joe Iver Hallgarth, 76, of Arvada, Colorado passed away Friday, March 1st, 2019 at Denver Hospice, Denver, Colorado. Joe was born in Little River, Kansas on April 24, 1942, a son of Beatrice Corine Charlotte (Nelzen) and Horace Marvin Hallgarth. Joe attended the Galva Grade School and graduated in 1960 from Galva High School Galva, Kansas. Joe worked as a Sprinkler Fitter for the National Automatic Sprinkler Industry. He later worked for a local Auto Parts Store in New Mexico. Joe enjoyed tracing and researching his family genealogy and sharing his information with his whole family. He loved his children and always wanted the best for them. He especially loved his grandchildren and always looked forward to their visits and times they would share together. Joe is survived by his children, Shana Dols, of Charlotte, North Carolina, Daniel Hallgarth and wife Renee, of Colorado Springs, Colorado, and Rebecca Armenta and husband Leonard, of Arvada, Colorado; his stepchildren, Michael McCormack and wife Lori, of Coeur d' Alene, Idaho and Julie Beers and husband Kent, of Billings, Montana; his brother, Robert Hallgarth and wife Gayle, of Burkburnett, Texas; his 13 grandchildren; two special nieces, Hannah and Corrine; many other nieces and nephews, other relatives and a host of friends. Joe was preceded in death by his parents, his brother Frank Hallgarth; his sister, Dolores Lundberg; Friends are invited to call on Monday, March 18, 2019 from 5 to 7 p.m. at the Glidden - Ediger Funeral Home, McPherson, Kansas. Graveside service will be held on Tuesday, March 19, 2019 at 11:00 a.m. at Empire Cemetery, rural Galva, Kansas with Pastor Phil Radatz officiating. In lieu of flowers, memorial contributions may be made to gofundme Joe Hallgarth Memorial Fund. These funds will go to a special friend who helped Joe and to the Denver Hospice. Glidden - Ediger Funeal Home was in charge of Local arrangements and the Aspen Funeral Home of Denver, Colorado .

The family of Joe I. Hallgarth created this Life Tributes page to make it easy to share your memories.

Send flowers to the Hallgarth family.