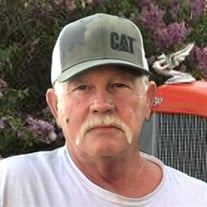 John Edward Schwartz, the son of Christina Margaret (Kuhn) McReynolds and John J. Schwartz was born on March 9, 1954 in Hoisington, Kansas. He was one of six children born to this union, four sons and two daughters, John Jr., Betty, Don, Theresa, Tom and John. John attended St. John grade school, Hoisington, Kansas and graduated from Hoisington High School, Hoisington, Kansas in 1972. He then attended Barton County Community College, Great Bend, Kansas for Automotive Mechanics. After John was discharged from the military he attended Hutchinson Community College, Hutchinson, Kansas where he received his Associates Degree. John E. Schwartz was united in marriage to Nancy Jean Sheridan on April 28, 1975 in Ellsworth, Kansas. The young couple established their first home together in Bainbridge, Maryland. This union was blessed with the birth of two daughters, Sonya and Megan. John proudly served in the United States Navy until his Honorable discharge in 1980. Through the years John worked as a Electrician for the Board of Public Utilities, McPherson, Kansas. He was a member of St. Joseph's Catholic Church in McPherson. John was a Christian, loving and devoted husband, father, grandfather, great grandfather, brother, uncle and dear friend to many. His wise counsel, gentle but firm guidance and gracious smile will be missed by all those who knew and loved him. He was very proud of his children and always wanted the very best for them. He was especially fond of his grandchildren and great grandchildren and looked forward to the times they would share together. John was a master of all trades who could build anything from a house to a vehicle from scratch. His favorite pastime was restoring old Chevy trucks but he was reluctant to even work on Fords or foreign vehicles. He also enjoyed traveling with the Hot Rod Power Tour, competing in car shows with the Mac Area Cruisers, and watching Nascar every weekend. He loved going to auctions and swap meets. For him, everything was for sale, for the right price of course. When John was a young man, he was an excellent drummer and still enjoyed listening to anything with a good drum line. John cherished his family and friends, but was always quick to say goodbye. John Edward Schwartz, 68, of Moundridge, Kansas, passed away at 5:44pm, Tuesday, March 29th, 2022 unexpectedly at his residence. John was preceded in death by his parents and his sister Betty Szmyd. He is survived by his loving and devoted wife Nancy Schwartz, of Moundridge, Kansas; his daughters, Sonya Jenkins and her husband Mike, of Moundridge, Kansas and Megan Schwartz, of Moundridge, Kansas; his siblings, Don Schwartz and his wife Julie, of Moundridge, Kansas, Theresa Murray, of Kingman, Kansas and Tom Schwartz and his wife Pat, of Wichita, Kansas. He is also survived by his six grandchildren, Bayli Hoppes, Brenen Hoppes, Ian Jenkins, Kaden Jenkins, J.D. Jenkins, Thomas Jenkins and two great grandchildren, Bronx Hoppes and Kingston Ogbevoen. Visitation will be held on Sunday, April 3, 2022 from 5:00 p.m. – 6:30 p.m. at the St. Joseph Catholic Church, McPherson, Kansas w/ Rosary starting at 6:30 p.m. Mass of Christian Burial service will be held on Monday, April 4, 2022 at 10:00 a.m. at St. Joseph's Catholic Church in McPherson, Kansas with Fr. Ben Shockey officiating. Burial will be at 3:00 p.m. at the Carneiro Cemetery, Carneiro Kansas. Memorials are to St. Joseph Catholic School and they can be sent to Glidden-Ediger Funeral Home; 222 W. Euclid St., McPherson, Ks. 67460.

The family of John Edward Schwartz created this Life Tributes page to make it easy to share your memories.

Send flowers to the Schwartz family.