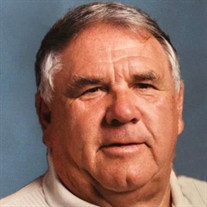 John William "JB" Wiggins, 81, of McPherson, Kansas, passed away at 5:15 a.m., Thursday, May 30th, 2019 while in the company of family members at McPherson Hospital. JB was born in Kansas City, Missouri on September 26, 1937, a son of Leona May (Davis) and John Joseph Wiggins. JB attended Washington Elementary School, Park School and graduated from McPherson High School, McPherson, Kansas in 1955. He was a member of First Christian Church in McPherson. Through the years John worked at NCRA as a pipefitter for 42 years until he retired in 1999. JB was a member of Turkey Creek, Rolling Acres and Lindsborg Golf Courses where he golfed faithfully for over 50 years. JB enjoyed golf, gardening, growing tomatoes, tinkering in his shop woodworking, spending time with his family and with his friends at table 1 at Hank's Place. John William "JB" Wiggins was united in marriage to Genevieve Godinez on October 20, 1955 in Kansas City, Missouri. The young couple established their first home together in Kansas City. This union was blessed with the birth of 2 sons, Cameron and Cory. He is survived by his loving and devoted wife Gen Wiggins, of McPherson, Kansas; his son, Cameron Wiggins and his wife Shelly, of McPherson, Kansas and his sister Lurinda West and her husband Roy, of Oklahoma City, Oklahoma. He is also survived by grandchildren 2 - Lindsay Wiggins and Austin Wiggins. John was preceded in death by his parents; his son, Cory Wade Wiggins and his brother Jim Wiggins. A memorial service will be held Tuesday, June 4, 2019 at 10:30 a.m. at the First Christian Church, McPherson, Kansas with Pastor Lynn Scott officiating. Burial will be at a later date. Memorials may be made to First Christian Church, CASA or McPherson Humane Society and they can be sent to Glidden-Ediger Funeral Home; 222 West Euclid St., McPherson, Kansas 67460.

John William "JB" Wiggins, 81, of McPherson, Kansas, passed away at 5:15 a.m., Thursday, May 30th, 2019 while in the company of family members at McPherson Hospital. JB was born in Kansas City, Missouri on September 26, 1937, a son of Leona... View Obituary & Service Information

The family of John William "JB" Wiggins created this Life Tributes page to make it easy to share your memories.

Send flowers to the Wiggins family.