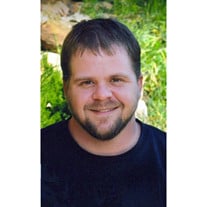 Joshua Clare Josh Miller, 36, of McPherson, Kansas, passed away at 1:16 a.m., Sunday, October 19, 2014 at 1600 Limestone Road and Union Pacific Railroad Crossing, McPherson, Kansas. Joshua Clare Miller, the son of Brent Dale and Deborah “Debb” (Crawford) Miller, was born January 12, 1978 at McPherson, Kansas. He was one of two children born to this union, one son and one daughter: Joshua and Mallory. He was Baptized at the First Presbyterian Church. Joshua attended the Lincoln Grade School, McPherson Middle School, and graduated from McPherson High School, McPherson, Kansas. He then attended and graduated from Hutchinson Community College, Hutchinson, Kansas where he received his degree in Business.Josh was united in marriage to his high school sweetheart, Stephanie Nichole Nelson on February 14, 2004 at New Gottland Covenant Church, McPherson, Kansas. The young couple established their first home together in McPherson, Kansas. This union was blessed with the birth of two children, a son and a daughter: Mason Cole and Payten Clare.Through the years Josh worked at Porky's Barbecue, was a machinist/engine builder for Jim’s Motor Service of Galva and was currently working for Hospira as a Senior Production Officer.Josh was a Christian, devoted and caring husband, father, son, nephew, uncle, co-worker, and dear friend. His sense of humor and gracious smile will be missed by those who knew and loved him. He was very proud of his children and always wanted the best for them. Josh enjoyed working on cars and racing, grilling for his family and friends, spending as much time as he could with his children and he enjoyed life to the fullest. He also loved sports, both playing and watching them. It didn’t matter where Josh was, he never met a stranger. Joshua Clare Josh Miller, 36, of McPherson, Kansas, passed away at 1:16 a.m., Sunday, October 19, 2014 at 1600 Limestone Road and Union Pacific Railroad Crossing, McPherson, Kansas. He was preceded in death by his father Brent Dale Miller; paternal grandparents M. Clare and Sadie L. (Haflin) Miller and his maternal grandparents, Douglas and Paulette (White) Crawford; his uncle, Stephen Miller, and his aunt, Marka Miller.Surviving family members include his loving wife, Stephanie Miller, of McPherson, Kansas; his children, Mason Cole Miller and Payten Clare Miller, both of the home; his mother, Debb Miller-Dyer and her husband Kevin, of McPherson, Kansas; his sister, Mallory Julius and her husband Joseph, of McPherson, Kansas; his grandmother, Wilma Crawford, of Inman, Kansas, his niece, Lacie Ranae; his nephew, Ryan Joseph, and one more nephew on the way, Ethan Joshua; cousins, other relatives and a host of friends. Friends are invited to call on Friday, October 24, 2014 from 6 to 8 p.m. at Glidden - Ediger Chapel, McPherson, Kansas. Graveside service will be held at 10:00 a.m., on Saturday, October 25, 2014 at the McPherson Cemetery, McPherson, Kansas. Memorial service will be held at the First Presbyterian Church, McPherson, Kansas, at 11:00 a.m. on Saturday, October 25, 2014 with Reverend H. Dick Reynolds, Jr. officiating. Special music “Amazing Grace” and “Jesus Loves Me” will be sung and played by Michelle King. “Dancing In The Sky” will be played.In lieu of flowers, memorial contributions may be made to Joshua C. Miller Children's Education Fund and they can be sent in care of the Glidden - Ediger Funeral Home; 222 West Euclid Street; McPherson, Kansas 67460.USHERSRay Garibaldi Mike GaribaldiKevin Geren Jason Parks

The family of Joshua Clare Miller created this Life Tributes page to make it easy to share your memories.