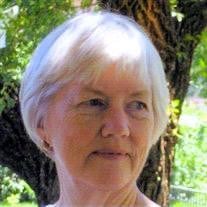 Julie A. Baldwin, 70, of McPherson, Kansas, passed away at 6:56 a.m., Tuesday, December 5th, 2017 peacefully, at her home. Julie was born in McPherson, Kansas on May 19, 1947, a daughter of Joan "Joanie" Marie (Okerlind) and Lawrence Lee "Larry" Collins. Julie attended the Manhattan, Colby, and McPherson schools, graduating from McPherson Senior High School in 1965. She then attended Kansas State University, Manhattan, Kansas and graduated from San Diego State University with her BA degree in Fine Arts and later received her Teachers Certification from McPherson College, McPherson, Kansas. She was a lifetime member of Trinity Lutheran Church McPherson, Kansas, where she was a member of the WELCA, Altar Guild, Women's Circles, Choir, and served her church in many other capacities. Julie was a great mother. She took this job seriously which to her being a room mother, scout leader, and Sunday School teacher among other things. Through the years she worked as the Trinity Lutheran Church secretary, was a substitute teacher for area schools, taught private art Lessons, and worked for NCRA. After retiring, she was able to pursue her passion of being a full-time artist. Julie was a member of many art organizations through the years including the McPherson Arts Council, Art in the Park, Hutchinson Art Center, and Friday Morning Artists. She loved painting and creating all kinds of art and had many shows at area galleries. Julie enjoyed her family, her casts, going to grandkids activities and events, organizing family reunions, taking many pictures and working on her photography earning her the name of Grandma Click. Julie Ann Collins was united in marriage to Ronald Lee Reno in June of 1969 at San Diego, California. This union was blessed with the birth of two children, Tasha and Lindy. Julie Ann Reno was united in marriage to Allen V. Baldwin on November 25, 1989 at Trinity Lutheran Church, McPherson, Kansas and this union, brought Allen's two sons Chris and Clark into the family. Julie is survived by her loving and devoted husband of over twenty-eight years, Allen Baldwin, of McPherson, Kansas; her children, Tasha Hickert and her husband Marlin, of Hutchinson, Kansas, Lindy Reno and his wife Rachel Scott, of McPherson, Kansas, Chris Baldwin and his wife Christine Kenneally, of Melbourne, Australia, and Clark Baldwin and his wife Meagan, of Newton, Kansas; her sister, Melinda Lee Sloup, of Lenexa, Kansas; her 11 grandchildren, Henry Hickert, Ivan Hickert, Grace Hickert, Amethyst Hale, Emily Reno, Jordan Reno, Emerson Reno, Nathaniel Baldwin, Fineas Baldwin, Jenna Baldwin, and Callan Baldwin; several nieces and nephews, other relatives and a host of friends. Julie was preceded in death by her parents, Larry and Joanie Collins and her sister, Laurie Joan Lindfors; Friends are invited to call on Sunday, December 10, 2017 from 2 to 4 p.m. at Trinity Lutheran Church, McPherson, Kansas. The funeral service will be held at Trinity Lutheran Church, McPherson, KS, at 10:30 a.m. on Monday, December 11th, 2017 with The Reverend Tim Leaf officiating. The final resting place will be at the McPherson Cemetery McPherson, Kansas. In lieu of flowers, memorial contributions may be made to Trinity Lutheran Church and they can be sent in care of the Glidden - Ediger Funeral Home; 222 West Euclid Street; McPherson, Kansas 67460.

The family of Julie A. Baldwin created this Life Tributes page to make it easy to share your memories.

Send flowers to the Baldwin family.