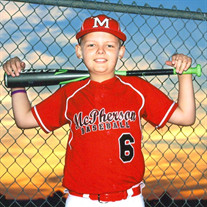 Kaiden Michael Schroeder, 12, of McPherson, Kansas, passed away after a long and courageous battle with cancer at 11:35 a.m., Friday, December 1st, 2017 while in the company of family members and friends, at Wesley Medical Center, Wichita, Kansas.... View Obituary & Service Information

The family of Kaiden M. Schroeder created this Life Tributes page to make it easy to share your memories.

Send flowers to the Schroeder family.