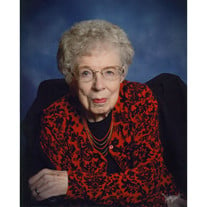 Kathryn Ann Sperling, 87, of Inman, Kansas, passed away at 2:18 p.m., Thursday, August 21, 2014 peacefully, at Pleasant View Home, Kansas. Arrangements are pending. Kathryn was born in Inman, Kansas on October 30, 1926, daughter of Anna Toews (Schierling) and Bernard Wipf Esau.She attended the Zoar Academy and graduated from Inman High School, Inman, Kansas in 1944. Kathryn was a member of Hoffnungsau Mennonite Church Inman, Kansas. Kathryn was a homemaker and through the years she worked as a secretary and bookkeeper for the McPherson Sale Barn, secretary for Northwestern National Life Insurance Company in McPherson and retired from U.S.D. 418 as a secretary at Wickersham grade school and Lincoln grade school in 1987. She enjoyed reading, cooking, traveling and helping others. Kathryn was united in marriage to Leslie A. Sperling, Sr. and they were married on April 28, 1946 at the Zoar Mennonite Brethren Church, Inman, Kansas. Les died on September 1, 2004. Kathryn is survived by her children; Kathleen Fagerlund and her husband Edward of Stillwater, Minnesota, and Leslie A. Sperling, Jr. and his wife Jerry of Lindsborg, Kansas; her four grandchildren, Andrew Bricker (Dacia), Amanda Fagerlund (Brandon), Aubrey Bowen (Michael), and Aaron Howlett (Katia); her nine great-grandchildren, Jack, Guthrie, Julian, Larissa, Andrew, Isabelle, Sophia, Samara, and Eliot.She was preceded in death by her parents, her husband Leslie A. Sperling and a brother, Ben Esau.Graveside service will be held at North Inman Cemetery, Inman, Kansas, at 9:00 a.m. on Monday, August 25, 2014 with Pastor Marvin Zehr officiating. A time of sharing will follow the graveside service, and all are invited to join the family for fellowship, coffee, and rolls until 11:30 a.m. at the Pleasant View Home, at the Harvest House.In lieu of flowers, memorial contributions may be made to Pleasant View Home, and they can be sent in care of the Glidden - Ediger Funeral Home; 222 West Euclid, Street; McPherson, Kansas 67460.

The family of Kathryn A. Sperling created this Life Tributes page to make it easy to share your memories.

Send flowers to the Sperling family.