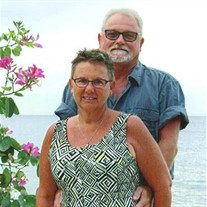 Kayla S Phillips, 58, of Galva, Kansas, passed away at 6:25 p.m., Thursday, November 22nd, 2018 suddenly, at Hutchinson Regional Medical Center, Hutchinson, Kansas. Kayla was born in Russell, Kansas on May 31, 1960, a daughter of Sally Ann (Zweifel) Schuckman and the late Jimmie Lee Palmer. Kayla attended the Wayne Elementary School, Wayne, Nebraska, and attended and graduated from Canton Galva High School, Canton, Kansas in 1978. She was a member of Galva United Methodist Church Galva, Kansas. Kayla was a homemaker and she took great pride in providing for her family in this manner, she also worked for as a florist for the Flower Fair, Dillons Floral Department where she was the manager, and worked part-time for the Balloon Landing. She later worked for Galva Lumber Company, Galva, Kansas in the flooring department and was currently working for Kropf Lumber in Hesston, Kansas. Kayla was a member of Karsyn's Loving Arms and was a former member of Order of Eastern Star, McPherson, Kansas. Kayla enjoyed her grandchildren, traveling, spending time at the cabin at Maxwell State Lake and spending time on the pontoon boat. For many years, she loved watching Jerry and Willard racing and was a part of their pit crew. Kayla Sue Palmer was united in marriage to Jerry Wayne Phillips on November 25, 1978 at Galva Methodist Church. The young couple established their first home together in Galva. They were blessed with their chosen daughter, Raven. She is survived by her loving and devoted husband of nearly forty years, Jerry W. Phillips, of Galva, Kansas; her daughter Raven Phillips, of McPherson, Kansas; her "adopted sons" Travis Hoppes and his wife Deb of McPherson, Kansas and Austin Grabowski, of Mira Loma, California; her mom, Sally Schuckman and husband Willard, of McPherson, Kansas; her sister Kelly Alexander and husband Daril, of McPherson, Kansas; her 5 grandchildren, Gracelynn Krause, Copeland Krause, Karleigh Lane, Brenton Phillips, and Kustom Phillips; other relatives and a host of friends. Kayla was preceded in death by her father, Jimmie Palmer; her paternal grandparents, Marge and Jim Palmer; maternal grandparents, Sam and Edith Zweifel; and great-niece, Karsyn Lee Alvord. Visitation will be held on Monday, November 26, 2018 from 5 p.m. to 7 p.m. at Glidden - Ediger Chapel, McPherson, Kansas. The funeral service will be held at First Christian Church, McPherson, Kansas, at 11:00 a.m. on Tuesday, November 27th, 2018 with Reverend Lynn Scott officiating. Burial will be at the Empire Cemetery Galva, Kansas. In lieu of flowers, memorial contributions may be made to the Kayla Phillips Memorial Fund and they can be sent in care of the Glidden - Ediger Funeral Home; 222 West Euclid Street; McPherson, Kansas 67460.

The family of Kayla S. Phillips created this Life Tributes page to make it easy to share your memories.

Send flowers to the Phillips family.