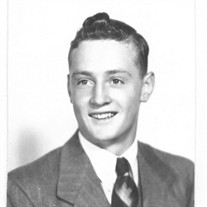 Keith G. Mines Nov. 15, 1930 – Feb. 21, 2021 Keith George Mines, who died Sunday at Bethany Home in Lindsborg, was born Nov. 15, 1930, on a cold winter’s night in a farmhouse near Oberlin, Kansas. It was the midst of the Great Depression, and his parents, Cecil and Anne Mines, were not prepared for a twin brother appearing moments later. They put the babies in a makeshift incubator – shoeboxes inside a wooden drawer – on the stove to stay warm. The twins had two older sisters, Patricia and Delphine; the oldest child, Billy Chris, had died at birth. The family soon moved to a farm near Cedar Bluffs, where Keith attended Beaver Creek country school until eighth grade. Decatur County High School in Oberlin was 12 miles away so the twins boarded in town during the week, returning to the farm on weekends to help out. They both excelled in multiple sports, most notably wrestling, and Keith was salutatorian of his graduating class in 1948. Keith attended Kansas State for a year before marrying his high school sweetheart, Marilyn Jo Frickey, at the Methodist Church in Oberlin on Oct. 15, 1950. The newlyweds moved to Denver where Keith worked at Remington Rand Office Equipment. He enlisted in the Air Force in 1952 and was stationed at Maxwell Air Force Base in Montgomery, Alabama. An aptitude test there uncovered a talent for accounting, which proved to be the beginning of a long, successful career. Their first child, Cynthia Jo, was born at the base hospital on March 26, 1955. After Sgt. Mines, who received a medal for good conduct, was honorably discharged from the Air Force in 1956, he returned to Kansas State, determined to get a degree in accounting. He was inducted into Alpha Kappa Psi, the professional business fraternity, and named the top accounting student at Kansas State by the Wall Street Journal. He earned both bachelor’s and master’s degrees in accounting and passed all parts of the CPA on the first try. He accepted a position on the commercial audit staff with one of the country’s top accounting firms, Arthur Andersen, and the family moved to the Kansas City area in 1958. They had two more children there: Michael Keith, in 1958, and Lynda Lea, in 1959. Keith’s promotion to manager in 1963 meant much longer hours and more travel, taking him away from his family, so he accepted a position with Farmers Alliance Mutual Insurance in McPherson in 1964. They found small-town life more to their liking, and Keith volunteered as a little league baseball coach and with Boy Scout Troop #133. He and Marilyn joined McPherson’s Methodist Church and enjoyed bowling leagues and bridge clubs. He founded his own CPA firm in 1968 and continued to work at the career he loved until age 78 when an extended illness forced “early” retirement. Throughout his life, he upheld the highest ethical standards, both professionally and personally, and was known for his patience, kindness and generosity. After losing his beloved wife in 1993, his affectionate nature focused on his six grandchildren, taking them to Disneyland, Worlds of Fun, Kansas City Royals’ games and Silver Dollar City. He taught them to ride bicycles and never tired of playing tennis or miniature golf with them, and made sure his “candy drawer” was well stocked before they visited. He was preceded in death by his parents, Cecil and Rowena Anne (Wilson) Mines; wife, Marilyn Frickey Mines; and siblings Billy Chris Mines, Patricia Carswell, Delphine Spencer and Kyle Mines. Survivors include children Cynthia Mines (Toby Stucky), Michael Mines (Janice) and Lynda Bickel (Greg); grandchildren Kelli Smith (Jeff), Tyler Bickel (Kathleen), Amy Bickel, Andrew Mines (Jenny), John Mark Mines (Kendall) and Lyndsey Bickel as well as step grandchildren Sara Stucky and Erica Ruzicka (Mark), three great granddaughters, three step grandchildren, and several nieces and nephews. Visitation (masks required) is 4 to 6 p.m. Wednesday, February 24, 2021, at Glidden-Ediger Funeral Home in McPherson. Private burial will take place at McPherson Cemetery with celebration of life planned for later this year. Memorials may be made to Bethany Home in care of Glidden-Ediger Funeral Home.

The family of Keith G. Mines created this Life Tributes page to make it easy to share your memories.

Send flowers to the Mines family.