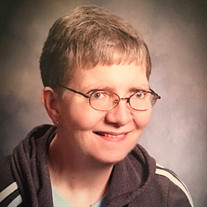 Kim Marie Buller, 58, of McPherson, Kansas, passed away at 9:27 p.m., Saturday, August 4th, 2018 peacefully, at Angel Arms. Kim was born in Belleville, Kansas on February 9, 1960, a daughter of Marvel Berniece (Lyons) and Bobby Lee Lewis. Because of dad's job and often relocating, Kim attended several grade schools. After the family settled in McPherson in 1970, Kim attended Park School, McPherson Junior High and graduated from McPherson High School, McPherson, Kansas in 1978. She then attended the Salina Area Technical School and completed and received the Commercial and Advertising Art Degree. She was a member of Countryside Covenant Church McPherson, Kansas, where she was a member of the Women's Precept Class and Adult Sunday School Class. Kim was a homemaker and also worked for Modern Graphics and the Canton Pilot and later as an Operator for Disability Supports of the Great Plains, McPherson, Kansas. Kim was blessed with an amazing artistic talent and enjoyed working on the sets for the musicals in high school and continued using her talents in everything she did. Kim was diagnosed with MS early in her adult life. The ups and downs of this disease were very challenging. Losing her sight as well as feeling in her hands was an awful thing for an artist to experience. Kim had an amazing attitude and was such a positive person as she faced life and she was able to share that positive attitude to everyone around her. Kim Marie Lewis was united in marriage to Eldon Ray Buller on May 31, 1980 at McPherson, Kansas. This union was blessed with the birth of two children, a daughter and a son, Angela and Andy. She is survived by her children, Angela O'Dell and husband Billy, of Lee Summit, Missouri and Andy Buller, of Lees Summit, Missouri; her siblings, David Lewis and wife George Ann, of Canton, Kansas and Kara Smith and husband Terry, of Goodland, Kansas; her uncle and aunts, Jim and Mitzie Lewis, of Salina, Kansas and Helen Shaffer, of Salina, Kansas; her 3 nieces, Britney Smith (Kameron Duncan), Nicole Ploeger (Matt), and Emily Smith; 1 great-nephew, Weston Toplikar, with one on the way due on Kim's Birthday; her DPOA's over the years, Marcia Williams and Vaughn Ingram; other relatives and a host of friends. Kim was preceded in death by a brother Terry Lewis and her parents, Marvel and Bob Lewis. Visitation will be held on Thursday, August 9, 2018 from 5 p.m. to 7 p.m. at Glidden - Ediger Chapel, McPherson.. The funeral service will be held at Glidden - Ediger Chapel, McPherson, Kansas, at 2:30 p.m. on Friday, August 10th, 2018 with Reverend Jon Black officiating. The final resting place will be the McPherson Cemetery McPherson, Kansas. In lieu of flowers, memorial contributions may be made to Kansas Multiple Sclerosis; Countryside Covenant Church or Angel Arms and they can be sent in care of the Glidden - Ediger Funeral Home; 222 West Euclid Street; McPherson, Kansas 67460.

The family of Kim Marie Buller created this Life Tributes page to make it easy to share your memories.

Send flowers to the Buller family.