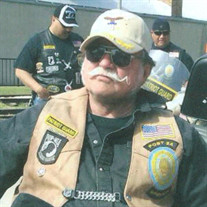 Larry Wayne "Wacky Welder" Embers, Sr., 71, of McPherson, Kansas, passed away at 9:33 a.m., Sunday, November 25th, 2018 as a result of an automobile accident, on US Hwy 54, mile marker 98 between Greensburg and Mullinville, Kansas, in Kiowa County. Larry was born in McPherson, Kansas on August 5, 1947, a son of Rose Elizabeth (Ballweg) and Wayne Donald Embers. Larry attended Roosevelt Elementary school, McPherson, Kansas and Decatur Junior High and High School, Decatur, Arkansas. He received his GED in Colorado. He was a member of Calvary Baptist Church McPherson, Kansas. Through the years Larry worked farming jobs with his uncle in Colorado and was a Volunteer Fire Fighter in Monte Vista, Colorado. He later worked for McPherson Concrete Products as a welder and fabricator and built and re-built Silo Forms. He retired after 32 years with the company. He always said that he was a jack of all trades and a master of none. Larry was a member of Christians Motorcycles Association, Sons of the American Legion , American Legion Riders, and International Brothers Motorcycle Campers Association. Larry enjoyed riding his motorcycle, helping people, loved spending time with his family, especially his grandchildren, driving his truck and sharing coffee with friends at Wendy's ,Mr. B's, and Montana Mikes to name a few.,He also voulenteered at the Re Use It Center. Larry Wayne Embers was united in marriage to Bonnie Kay McCarney on May 3, 2008 at a CMA Bike Rally in Maxville, Kansas. The couple established their first home in McPherson. He is survived by his loving and devoted wife of over 10 years Bonnie Embers, of McPherson, Kansas; his children, Larry Wayne Embers Jr. and wife Ashlynn, of McPherson, Kansas, Penny Larimore, of Colorado, Jeff Hart, of Arizona, and Stacey Beyer, of Nebraska; his step children, Sherri Dennett and husband Donny, of Liberal, Kansas, Stephanie Kittle, of McPherson, Kansas, Charles Hodges, of McPherson, Kansas, and Jacob Royse and wife Shaunna, of Texhoma, Oklahoma; his siblings, Danny Embers and wife Angie, of Comanche, Iowa, Carol Clevenger and husband Bill, of Carlton, Texas, Stephen Embers, of Pratt, Kansas, Galen Embers and wife Jamie, of McPherson, Kansas, Sharon Bain and husband Jerry, of Rodgers, Arkansas, and Randy Embers and wife Virginia, of Bakersfield, California; his 19 grandchildren; his 15 great-grandchildren; many nieces and nephews, other relatives and host of friends. Larry was preceded in death by his parents, Wayne and Rose Embers; and sisters, Gail Embers and Vicky Heaton Memorial Service at at Glidden - Ediger Chapel, McPherson, Kansas on Wednesday, December 5, 2018 at 2:00 p.m. with Pastor Dan Cate officiating. Burial of cremains will be at the McPherson Cemetery, McPherson, Kansas. Memorial contributions may be made to Larry Wayne Embers Memorial Fund and they can be sent to Glidden-Ediger Funeral Home; 222 West Euclid Street, McPherson, Kansas 67460

Larry Wayne "Wacky Welder" Embers, Sr., 71, of McPherson, Kansas, passed away at 9:33 a.m., Sunday, November 25th, 2018 as a result of an automobile accident, on US Hwy 54, mile marker 98 between Greensburg and Mullinville, Kansas, in Kiowa... View Obituary & Service Information

The family of Larry Wayne Embers, Sr. created this Life Tributes page to make it easy to share your memories.