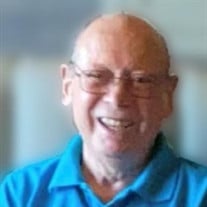 Larry Paul Owens, 82, of Hutchinson, Kansas, passed away at 6:34 P.M., Sunday, January 23rd, 2022 at Hutchinson Regional Medical Center. Larry was born in Bentley, Kansas on March 9, 1939, a son of Versa Louise (Forward) and Paul Edgar Owens. Larry attended Mount Hope Elementary School, Mount Hope, Kansas, and graduated from Haven High School, Haven, Kansas in 1959. He then attended and graduated from Western State College, Gunnison, Colorado. Larry honorably served in the U.S. Navy. Larry Paul Owens was united in marriage to Mignonne L. Wiens on September 4, 1964 at the First Presbyterian Church, Hutchinson, Kansas. Mignonne died on March 19, 2013. Larry was united in marriage to Diane Rose Pumphrey on February 14, 2014 at the Emanuel Lutheran Church, Hutchinson, Kansas. Diane died in April of 2021. He was a member of Emanuel Lutheran Church Hutchinson, Kansas. Through the years, Larry worked as an accountant for several companies in several different states and was later employed by the Gregory, Inc. in the Customer Service department. Larry was very good working with his hands and was very talented in woodworking and stain glass. He even owned and operated Top Drawer Restoration for a short time where he helped others restore their treasures. He also volunteered his time at the Hutchinson Food Bank and transporting Veterans to the VA. He is survived by his step-children, Donald Snook and his wife Joey, of Memphis, Tennessee and John Snook and spouse Tim Andrews, of Memphis, Tennessee; his sisters, Ruth Strassburg, of Hutchinson, Kathy Kipp and her husband David Roberts, of Hutchinson, Kansas, and Connie Utchman and husband Charles, of Marshfield, Missouri; his granddaughter, Madison Owens and step-grandson - Henry Snook; many nieces and nephews, other relatives and a host of friends. He was preceded in death by his parents; his son, Jason Eric Owens; his wives, Mignonne and Diane; and his sisters, Peggy Holoubek and Dixie Burch. DUE TO THE FORCAST FOR THURSDAY THE GRAVESIDE SERVICE IS MOVING INSIDE TO THE GLIDDEN - EDIGER CHAPEL. IT WILL STILL BE AT 10:30 A.M. Graveside Service will be held 10:30 a.m. on Thursday, February 3, 2022 at McPherson Cemetery in McPherson, Kansas with The Reverend Tim Carey officiating. Military honors will be presented by members of the American Legion Post 24 and Veterans of Foreign Wars Post 2715 both of McPherson and Mark Casebeer playing Taps. A Memorial service will be held at 2:00 p.m., on Thursday, February 3, 2022 at the Emanuel Lutheran Church, Hutchinson, Kansas with the Reverend Tim Carey officiating. Memorial contributions may be given to St. Jude's Children's Research Hospital and they can be sent in care of the Glidden - Ediger Funeral Home; 222 West Euclid St., McPherson, Kansas 67460.

The family of Larry P. Owens created this Life Tributes page to make it easy to share your memories.

Send flowers to the Owens family.