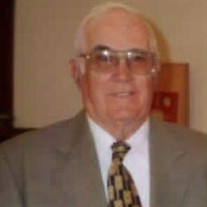 Larry Dee Smith, 83, of McPherson, Kansas passed away at 5:24p.m, Thursday, March 23rd, 2017 at McPherson Hospital . Larry Dee Smith, the son of Harold Roy and Helen Margaret (Anderson) Smith, was born August 15, 1933 at Lyons, Kansas. He was one of three children born to this union, one son and two daughters, Larry, Janis and Cheryl. Larry attended the Lyons grade schools, Lyons Junior High and graduated from Lyons, High School, Lyons, Kansas in 1951. It was during these years growing up that Larry started his lifelong love of sports. On October 23, 1953, Larry joined the United States Army in Kansas City, Missouri and honorably served his country during peace time. He had received the National Defense Service Medal and Good Conduct Medal. Larry was honorably discharged on October 22, 1955 at Fort Carson, Colorado. Larry moved back after his service to Lyons, Kansas where he discovered that they had no baseball diamond. Larry and a couple friends took it upon themselves and built Lyon’s first baseball field in which they were able to enjoy for many years. Larry was united in marriage to Barbara Ann Phillips and this union was blessed with the birth of four children, three sons and one daughter, Larry, Gregory, Lisa, and Darren. Larry and his family moved to McPherson, Kansas where they joined the First Christian Church, McPherson, Kansas. He started working as a manager for Mid-Plains Finance Company and later for the Home Credit Company. Larry purchased Superior Cleaners in 1975 and own and operated the cleaners until his retirement. Larry was a member of the American Legion Post 24, of McPherson. Larry was a loving and caring son, father, grandfather, great-grandfather, brother, uncle, and dear friend. His wise counsel, gentle but firm guidance, and gracious smile will be missed by those who knew and loved him. He was very proud of his children and always wanted the best for them. Larry was especially fond of his grandchildren and great-grandchildren, always looking forward to their visits and times they would share together. Larry loved sports, either playing or watching. He enjoyed hunting, fishing, and most of all watching his children and grandchildren participating in their sporting events. Larry was preceded in death by his parents, Harold and Helen Smith; a son, Gregory Smith; and two dear friends, Clark Adcock and Don Linden. Surviving family members include his children, Larry D. Smith and his wife Tonya, of Valdosta, Georgia, Lisa Prickett, of McPherson, Kansas, and Darren Smith and his wife Terri, of Valdosta, Georgia; his sisters, Janis Chrislip, of McPherson, Kansas and Cheryl Allison, of McPherson, Kansas; mother of his children, Barbara Smith, of Valdosta, Georgia; his nine grandchildren, Ryan Smith, Melissa Carman and her husband Brad, Lindsay Scarpate and her husband Jason, Dennis Prickett, Tara Prickett, Travis Prickett, Courtney Smith, Taylor Smith, and Avery Smith; his six great-grandchildren, Caroline, John, Ayden, Ellie, Taryn, and Joshua. The memorial service will be held at 10:30, a.m., on Monday, April 10, 2017 at the Glidden—Ediger Chapel, McPherson, Kansas with Dr. Lynn Scott officiating. Special music, “How Great Thou Art”, “His Eye Is On The Sparrow”, “and “The Old Rugged Cross” will be sung and played by Michelle King. Memorials are suggested to Hospice and Homecare of Reno County—McPherson in memory of Larry and they can be mailed to: Glidden - Ediger Funeral Home; 222 West Euclid Street; McPherson, Kansas 67460..

The family of Larry D. Smith created this Life Tributes page to make it easy to share your memories.