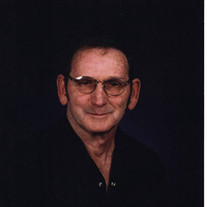 Larry D Smith, 79, of Mcpherson, KS, passed away at 10:35 p.m., Thursday, November 9th, 2017 while in the company of family members, at his residence. Larry was born in Sylvan Grove, Kansas on December 29, 1937, a son of Robert C. and Goldie (Clark) Smith. Larry attended the Lincoln grade schools and graduated from Lincoln High School, Lincoln, Kansas. He honorably served in the U.S. Navy. Larry worked at Femco, and retired from CertainTeed after 32 years of service. After Larry retired he helped his wife run a home base assembly parts business for 12 years. Larry was a member of the Lions Club of Windom, and served on the Windom Volunteer Fire Department. Larry enjoyed his family, fishing and camping Larry D. Smith was united in marriage to JoAnn Lucille Taylor on December 17, 1960 in Lincoln, Kansas. They young couple established their first home in Lincoln, Kansas. He is survived by his wife JoAnn Smith, of McPherson, Kansas; daughters, Teresa Crawford and her husband Greg, of McPherson, Kansas and Lisa Komarek and her husband Daniel, of Newton, Kansas; brothers, Robert Smith and his wife Ila, of Lincoln, Kansas, Gary Smith and his wife Jan, of Hoisington, Kansas, Ron Smith and his wife Shelia, of Ozark, Missouri; his sister, Patty Kissick and her husband Leland, of Lincoln, Kansas; his 5 grandchildren, Jason Crawford(Julia), Nicole Butler(Adam), Heather Crawford, Dustin Komarek(Jenn) and Luke Komarek; his 2 great-grandchildren,Caleb Crawford and Cole Butler; many nieces and nephews, other relatives and a host of friends. Larry was preceded in death by his parents; sisters Joan Michaels and Carolyn Smith. Friends are invited to call on Monday November 13, 2017 from 5:00 p.m. to 7:00 p.m. at Glidden-Ediger Funeral Chapel. Funeral Service will be held at Glidden-Ediger Chapel, McPherson, Kansas, at 11:00 a.m. on Tuesday, November 14th, 2017 with Father Juan Garza officiating. Final resting place will be at McPherson Cemetery McPherson, Kansas. Military Honors will be presented by members of thr Veteran's of Foreign Wars Post 2715 and American Legion post 24. In lieu of flowers, memorial contributions may be made to Good Shepard Hospice and they can be sent to Glidden-Ediger Funeral Home, 222 West Euclid St., McPherson, Kansas 67460.

The family of Larry D. Smith created this Life Tributes page to make it easy to share your memories.