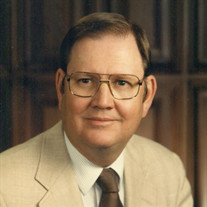 Larry Emmett Williams, 82, passed into eternal life on Feb. 14, 2019, at his home in McPherson, Kansas. He was born in Chickasha, OK, on July 11, 1936 to Zella (Venrick) and J. Emmett Williams. He was preceded in death by his sons, Paul Emmett and Jon Hart and his parents. He is survived by his wife of 61 years, Xan, his daughter Jesslyn of Tulsa, OK; his sister Ann and brother-in-law Jay Williams of Broken Arrow, OK, sister Billie Jean and brother-in-law Mark Thompson of Centennial, CO, his daughter-in-law Jennifer Blanchard of Vista, CA, nieces and nephews. Larry’s father worked on a seismograph crew and the family moved 33 times to towns in OK, TX, NM and even McPherson in 1942. The family lived in one the of Opera House apartments. Larry completed high school in Roswell, NM, in 1954. Larry and Xan met in Roswell and were married there in 1957 and continued their higher education. Larry achieved his bachelors and masters degrees in Mechanical Engineering from the University of New Mexico. He was an honors graduate and was named UNM Outstanding Senior Man in 1958. In 1959 Larry began his career with Cities Service Oil Company of Bartlesville, OK. Larry worked as an engineer for 2 years before being promoted into management. In 1983 he came to the National Cooperative Refinery Association as President and CEO. After retirement in 1995, Larry and Xan chose McPherson as their hometown. Larry was a faithful churchman serving St. Anne’s Episcopal as a lector and chalice minister and serving on the endowment committee of the Episcopal Diocese of Western Kansas. Larry was respected and admired for his intelligence, leadership and kindness as he served on dozens of corporate boards and with community organizations. Larry enjoyed fly fishing, reading, jigsaw puzzles and smoking his pipe. He and Xan were fortunate to have enjoyed 23 summers at their home in the Colorado mountains. A memorial service will be held on Thursday, February 21, 2019 at 1:30 p.m. at the Countryside Covenant Church. At a later date Larry’s cremains will be buried in the Memorial Gardens of St. Dunstan’s Episcopal Church, Tulsa, OK. In lieu of flowers, donations may be made to St. Anne’s Episcopal Church, McPherson Healthcare Foundation or McPherson Hospital and they can be sent in care of Glidden-Ediger Funeral Home, 222 W. Euclid, McPherson, KS 67460.

Larry Emmett Williams, 82, passed into eternal life on Feb. 14, 2019, at his home in McPherson, Kansas. He was born in Chickasha, OK, on July 11, 1936 to Zella (Venrick) and J. Emmett Williams. He was preceded in death by his sons, Paul Emmett... View Obituary & Service Information

The family of Larry Emmett Williams created this Life Tributes page to make it easy to share your memories.

Send flowers to the Williams family.