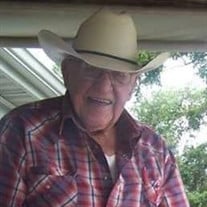 LaVern Kumle, 97, of Marquette, Kansas, passed away at 10:50 a.m., Saturday, March 17th, 2018 suddenly with his family by his side, at Riverview Estates. Hap was born on a farm in South Sharps Creek Township, Kansas on January 11, 1921, a son of Eva Marie (Gasser) and Philip Kumle. Hap attended Fairview Country School and South Sharps Creek Country School, McPherson County, Kansas. Later Hap graduated from Mason City Iowa Auctioneering School, Mason City, Iowa in 1952. Hap was a lifetime resident of Marquette and was a farmer, cattleman and auctioneer, he was a friend to all and enjoyed helping friends and family in what ever way he could. In later years , he enjoyed hauling hay with Wayne and the many adventures he and Dean could dream up. Two of the best friends a man could have. Hap was a member of the Elk's Club Hap enjoyed farming, coyote hunting, cattle business, playing dominoes with his friends, spending time with his family and friends. LaVern "Hap" Kumle was united in marriage to Cora Lucille Piper on November 9, 1941 in Little River, Kansas. This union was blessed with the birth of three children, one son and two daughters, Larry, Linda and Patsy.. He is survived by his children, Larry Kumle and his wife Brenda, of McPherson, Kansas, Linda, wife of Glenn Spoon, of Marquette, Kansas and Patsy Krause, of Marquette, Kansas; his grandchildren, Hope Brown(Kerry), Hollie Krause, Heather Krause, Shana Drury(Kent), Donna Kirkendall(David) and Amie Foote(Matthew); his great-grandchildren - Ashley Brown, Kelsie Anderson, Allison Kirkendall, Kyle Anderson, Matthew Kirkendall, Garrett Munson, Langston Foote, and Leyton Foote; many nieces and nephews, other relatives and a host of friends. Hap was preceded in death by his beloved wife, Lucille, and treasured grandson, Troy LaVern Kumle; brothers Pete and Gene Kumle; sisters Florene Hughes, Marcet Hanger, Lucille Walters and Betty Dean Usher. A Visitation will be held on Tuesday, March 20, 2018 from 5:00 p.m. - 7:00 p.m. at the Glidden - Ediger Chapel, McPherson, Kansas. A graveside service will be held at the Marquette Cemetery on Wednesday, March 21st, 2018 at 11:00 a.m. with PastorJeff Graber of the Marquette United Methodist Church officiating. The final resting place will be at the Marquette Cemetery, Marquette, Kansas. In lieu of flowers, memorial contributions may be made to Riverview Estates or Marquette Ambulance Service both of Marquette, Kansas and they can be sent in care of the Glidden-Ediger Funeral Home; 222 West Euclid Street; McPherson, Kansas 67460.

LaVern Kumle, 97, of Marquette, Kansas, passed away at 10:50 a.m., Saturday, March 17th, 2018 suddenly with his family by his side, at Riverview Estates. Hap was born on a farm in South Sharps Creek Township, Kansas on January 11, 1921, a... View Obituary & Service Information

The family of LaVern "Hap" Kumle created this Life Tributes page to make it easy to share your memories.

Send flowers to the Kumle family.