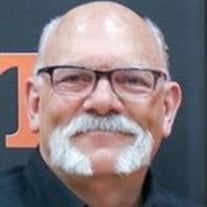 Lawrence Eugene "Larry" Karraker, 65, of Hutchinson, Kansas, passed away at 7:25 pm Monday, October 19th, 2020 while in the company of family members, at Hospice House. Lawrence was born in McPherson, Kansas on November 10, 1954, a son of Eulalia Loy (Emerson) and Clifford Earl Karraker. Larry attended the Wickersham grade school, Park School, McPherson Junior High and graduated from McPherson High School, McPherson, Kansas in 1973. He then attended a computer trade school in Wichita, Kansas. He grew up in the Baptist faith and was currently a member of North Point Community Church in Alpharetta, Georgia Larry worked for Cultura Technologies as a Customer Service Representative. Larry was a founding member of the McPherson Theatre Guild, was a mentor for outreach at Stand Up For Kids in Atlanta, Georgia. Larry enjoyed riding motor cycles, going to car shows, working on cars, and spending time with his family and friends. He spent many hours building model cars, playing guitar, and entertaining people with his impressions and stories. Lawrence Eugene "Larry" Karraker was united in marriage to Juliet Dinwiddie Mack on November 13, 1999 at Hutchinson, Kansas. The couple established their first home together in Hutchinson, Kansas. This union was blessed with seven children, Melissa, Michael, Tim, Kristina, Bonnie, Megan and Justin. He is survived by his loving and devoted wife of over twenty years, Juliet Karraker, of Hutchinson, Kansas; his children, Melissa Karraker, of Hutchinson, Kansas, Michael Karraker, of Wichita, Kansas, Timothy Karraker, of Perry, Oklahoma, Kristina Karraker, of Athens, Tennessee, Bonnie Gilzinger and husband Michael Gilzinger, of Inman, Kansas, Megan Niemeyer and husband Nicholas, of Hutchinson, Kansas, and Justin Harrison, of Bella Vista, Arkansas; his siblings, Yvonne' Stanton and husband Warren, Anthony, Kansas, Wallace Karraker and wife Mary, of New Berlin, Wisconsin, and Kevin Karraker and significant other Kim Nelson, of Galva, Kansas; numerous grandchildren; 1 great-grandson with one on the way! other relatives and a host of friends. Larry was preceded in death by his parents, Clifford and Eulalia Karraker; a sister-in-law, Lori Ann Gray-Karraker; a nephew, Tyler Ray Karraker; a granddaughter, Jacynda Karraker Due to Covid 19 Private family memorial service will be held at Glidden - Ediger Chapel, McPherson, KS, with Chaplain Lawrence Booker officiating. In lieu of flowers, memorial contributions may be made to McPherson County Humane Society in memory of Larry and they can be sent in care of the Glidden - Ediger Funeral Home; 222 W. Euclid; McPherson, Kansas 67460. On Friday October 30, at 7pm with doors opening at 6:30 pm any and all family and friends are invited to the McPherson Opera House for a "Rock Out to Life Celebration" for Larry Karraker.

Lawrence Eugene "Larry" Karraker, 65, of Hutchinson, Kansas, passed away at 7:25 pm Monday, October 19th, 2020 while in the company of family members, at Hospice House. Lawrence was born in McPherson, Kansas on November 10, 1954, a son of... View Obituary & Service Information

The family of Lawrence E. "Larry" Karraker created this Life Tributes page to make it easy to share your memories.

Send flowers to the Karraker family.