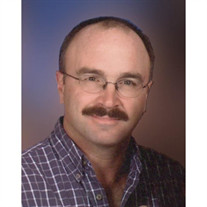 Leon January, 51, of Little River, Kansas, passed away at 11:20 am, Friday, August 5th, 2016 at his home. Leon was born in Sterling, Kansas on September 16, 1964, a son of Rita Marie (Noll) January and Edwin Austin January.Leon attended Little River Grade School, Little River-Windom Junior High, and graduated from Little River High School, Little River, Kansas in 1983. He then attended Salina Area Vo-Tech College, Salina, Kansas.He was a member of Holy Trinity Catholic Church Little River, Ks. Leon worked as a mechanic for John Deere, McPherson for 16 years, CHS Refinery, McPherson for 20 years, and was a farmer. Leon was a member of the Little River Fire Department. He enjoyed hunting, farming,4-wheeling, working on cars and anything else he could get his hands on, and just being outside. Leon W. January was united in marriage to Ranada R. Rogers on April 24, 1993 at First Christian Church, McPherson, Kansas. The young couple established their first home together in McPherson. After a year the couple moved to his grandparent's homestead, Northeast of Little River. He is survived by his loving and devoted wife of over twenty-three years, Ranada January, of Little River, Kansas; his children, Morgan January, Colin January, and Amanda January, all of Little River, Kansas; his mother, Rita January, of Lyons, Kansas; his brothers, Jim January and his wife Atheta, of Lyons, Kansas, Lynn January, of McPherson, Kansas, Terry January and his wife Tammy, of Moundridge, Kansas, and Greg January and his wife Mikala, of Shawnee, Kansas; many nieces and nephews, other relatives and a host of friends. Leon was preceded in death by his father, Edwin January and a sister, Diane Ashley.Visitation will be on Monday, August 8, 2016 from 6 to 8 p.m. with Rosary starting at 8:15 p.m. at Holy Trinity Catholic Church, Little River, Kansas. A Mass of Christian Burial will be celebrated at Holy Trinity Catholic Church, Little River, Kansas, at 10:00 a.m. on Tuesday, August 9th, 2016 with Fr. Mike Maybrier and Fr. Roger Lumbre officiating. The final resting place will be at the Bean Cemetery Little River, Kansas. In lieu of flowers, memorial contributions may be made to Cancer Center of Kansas in McPherson and they can be sent in care of the Glidden - Ediger Funeral Home; 222 West Euclid Street; McPherson, Kansas 67460.

The family of Leon January created this Life Tributes page to make it easy to share your memories.

Send flowers to the January family.