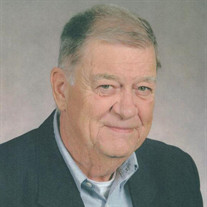 Leslie Hamilton "Les" Funk, of Toronto, Ontario, Canada passed away January 30, 2018 at Trillium Mississauga Hospital. Les was born in McPherson, Kansas on September 14, 1936, a son of Amanda Valentine (Nelson) and Corwin Hamilton Funk. Les attended the McPherson grade schools and graduated from McPherson High School, McPherson, Kansas in 1954. He then attended and graduated from McPherson College in 1962. He later attended and graduated from the Insurance Institute of America. He attended the Realtors Institute and received the designation GRI. Les honorably served in the U.S. Navy as a Radarman 3rd Class in the Korean War. He received the Good Conduct, China Service and National Defense Medals. Through the years Les worked for the Alliance Companies as a Claims manager, sales representative and partner for the Duguid Investment Company, McPherson, Kansas and later owned and operated Centennial Development Company in McPherson area. Les was a member of the Blue Lodge, Veterans of Foreign Wars Post 2715, American Legion Post 24, and Disabled American Veterans Chapter #55. Les was united in marriage to the love of his life, Marilyn Jean Wilson on August 10, 1978 Toronto, Ontario Canada. Surviving family members include his loving and devoted wife of nearly 40 years, Marilyn Funk of Toronto, Ontario Canada; his daughters, Susan Crowell (Mark) of Overland Park, Kansas and Kirsten Allen (John) of Andover, Kansas; his cherished granddaughter, Abby Allen of Andover, Kansas, his extended Canadian family and a host of other relatives and friends. Les was preceded in death by his parents, his brother, Charles LaVerne Funk. Though Les left Mcpherson in 1986, he always considered McPherson his home and participated in May Day, Memorial and Veterans Day.  He loved the community of McPherson and always missed his true home. Graveside services will take place at the McPherson Cemetery, McPherson, Kansas at 3:00 p.m. on Friday, May 25, 2018 with members of the Masonic Lodge providing member services and members of the American Legion Post 24 and Veterans of Foreign Wars Post 2715 providing military honors. In lieu  of flowers, Memorial contributions may be made to McPherson Shrine Children's Fund or Donors choice.

The family of Leslie H. "Les" Funk created this Life Tributes page to make it easy to share your memories.

Send flowers to the Funk family.