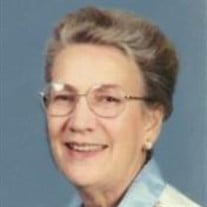 Lillian Frances Violet (Vi) Lundquist passed away peacefully in her sleep at Cedar Ridge in McPherson on Tuesday, May 26, 2020. She was born at McPherson Hospital in April 1928 to Elmer and Lilly (Aelmore)Norland, Violet spent most of her life in McPherson County. She was the youngest and last remaining of nine Norland children: Abner, Wilbert, Verne, Edna(Hallgarth), Emery, Zelma(Walline), Kenneth, Maxine (Allen), and Violet. Growing up in the country near Galva, Violet attended North Diamond Country School, McPherson High School and Beauty school, Salina, Kansas. United in marriage to Jerry Cockriel in 1953, they were blessed with four children: Jerelyn(Leinweber), Kathryn(Janzen), James and David. While her children were young, Vi was active in Cub Scouts and Camp Fire Girls and PTA at Wickersham Elementary School. While their union was not to last, Violet and Jerry both took great pride in their grandchildren: Michael, Timothy(TJ), and Jeramy Janzen. Sadly Jerry was killed in a construction accident in 1989, but would have been just as pleased as Violet with the birth of another grandson Johnny Leinweber, in 1994. Great-grandchildren followed in the years to come: Oscar Schmidt, LilyAnn, Aiden and Connor Janzen. Violet was a long-time employee of McPherson Memorial Hospital. After retiring in 1994 she was an auxiliary volunteer there for several more years. In 1995 Violet married Marvin Lundquist in McPherson, Kansas. Together they traveled a great deal, including adventures with an RV Club. They were active in many organizations including the Kansas Gem and Mineral Club, McPherson Opera House and McPherson Theater Guild. Violet used her amazing creativity and sewing skills to assemble many of the costumes by the guild for productions over the years. Something she enjoyed very much. Violet was recruited early on by Virginia Engle to join the Opera House Preservation Committee. Encouraged by Mrs. Engle, Violet headed up the original "Apartment 6" thrift shop for many years. With a hard working group of volunteers, together they cleared out debris, dirt and dust to make way for the busy little thrift shop, all without heating or air-conditioning. They accepted and sorted through numerous donations, often driving to pick them up themselves. All proceeds from the "Apartment 6" thrift shop benefitted the Opera House and the numerous purchases by the public added up in an amazing manner. Considered an Opera House Legend, Violet took great pleasure in occasionally attending a performance at the magnificent Opera House with her beloved family. Violet was preceded in death by her husband Marvin; her son James, Great-grandson, Connor Scott Janzen and her Son-in-law Gary Leinweber. She will be greatly missed by her surviving children: Jerelyn, Kathy and David, grandsons, Michael and wife Micah, TJ, Jeramy Janzen and Johnny Leinweber and Great-grandchildren, Oscar, LilyAnn, and Aiden, numerous nieces, nephews and cousins. The family wishes to thank the staff of Cedars and Cedars Ridge for their care of our mother. A celebration of Life will be at a later date. Memorials are to the Vi Lundquist memorial fund and they can be sent to Glidden-Ediger Funeral Home; 222 W. Euclid, McPherson, Kansas 67460.

Lillian Frances Violet (Vi) Lundquist passed away peacefully in her sleep at Cedar Ridge in McPherson on Tuesday, May 26, 2020. She was born at McPherson Hospital in April 1928 to Elmer and Lilly (Aelmore)Norland, Violet spent most of her life... View Obituary & Service Information

The family of Lillian Frances "Vi" Lundquist created this Life Tributes page to make it easy to share your memories.

Send flowers to the Lundquist family.