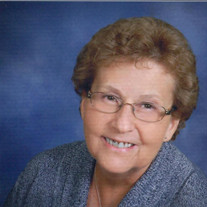 Linda Marlene Chaney, 72, of McPherson, Kansas, passed away unexpectedly at 8:51 a.m., Wednesday, July 21st 2021 at her home. Linda was born in St. Edward, Nebraska on June 21, 1949, a daughter of Nina Olga (Navarro) and Robert Leroy Striker, Sr. Linda attended the Hastings grade school, Hastings, Nebraska, and graduated from Ewing High School, Ewing, Nebraska in 1967. She then attended Central Christian College of Kansas, McPherson, Kansas where she received her associates degree. At the age of 12 Linda and her little sister, Donna age 7, became part of the Walter and Alice Miller family. She was a member of First Christian Church McPherson, Kansas. Linda Marlene Striker was united in marriage to Michael Ray Chaney on June 3, 1972 at the Free Methodist Church, McPherson, Kansas. The young couple established their first home together in McPherson. This union was blessed with the birth of two children, one son and one daughter, James and Carla. Linda worked for Farmers Alliance as a secretary for four years. Linda was a homemaker and she took great pride in providing for her family in this manner. After the kids were in school she started working for U.S.D. 418 Food Service and she retired in 2012. Linda volunteered at Save-N-Share. Linda enjoyed her home and spending time with her family. She is survived by her loving and devoted husband of over 49 years, Michael Chaney, of McPherson, Kansas; her children, James Chaney and wife Ramona, of Wichita, Kansas and Carla Unruh and husband Phil, of McPherson, Kansas; her siblings, Donna Arehart and husband Tom, of Orchard, Nebraska, Ann Davis and husband Gary, of Victorville, California, Robert Striker and wife Ruby, of College Station, Texas, Dan Miller and wife Jan, of Springfield, Nebraska, and Ruth Hawk and husband Mark, of Omaha Nebraska; her favorite grandson, Danial Chaney; other relatives and a host of friends. Linda was preceded in death by her parents; her foster parents; and four brothers Edward Striker, Donald Striker, Michael Striker, and Charles Striker. Visitation will be on Monday, July 26, 2021 from 5 p.m. to 7 p.m. at Glidden - Ediger Chapel, McPherson, Kansas. Graveside service will be held at McPherson Cemetery, McPherson, Kansas, at 10:00 a.m. on Tuesday, July 27th, 2021 with Pastor Lynn Scott officiating. In lieu of flowers, memorial contributions may be made to Save-N-Share in memory of Linda and they can be sent in care of the Glidden - Ediger Funeral Home; 222 West Euclid; McPherson, Kansas 67460.

The family of Linda Chaney created this Life Tributes page to make it easy to share your memories.

Send flowers to the Chaney family.