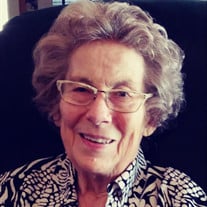 Longtime Weatherford resident Loraine Royal Witcher passed away on December 18 in the company of family members. She had been living near her son and daughter-in-law in McPherson, Kansas since breaking her neck in a fall in 2014. Loraine was born to Otis and Ruth (Lacy) Royal April 12, 1929 in Hollis, Oklahoma. She started her education in the small rural Arnett School and graduated from Hollis High School in 1947. She married Gale Witcher in 1948 and the couple made their home in Weatherford where they both attended Southwestern State College. She was a student secretary in the music department and then worked for the Veterans Administration Guidance Center before transferring to the college business office in 1949. With the exception of one year when the family moved to Silver Spring, Maryland, Loraine worked at Southwestern until her retirement in 1985. She was secretary for dean of instruction Dr. Louis Morris until her title was changed to administrative assistant when the college transitioned to a university and Dr. Morris became vice president for academic affairs. After retiring from Southwestern she served as administrative assistant for the new Pioneer Center. She worked there until her second retirement in 2008. Loraine was a member of the church of Christ and faithfully attended in Weatherford and later in McPherson. Church was always the top priority for Loraine. She influenced generations of young women through her teaching of Bible classes. She taught countless Bible correspondence courses through World Bible School. Loraine was preceded in death by her husband, her parents, two sisters Dorothy and Mona, one brother Sam, and great-grandson Samuel. She is survived by son Gary and his wife Amy of McPherson, Kansas, daughter Ruth Ann Tesic and her husband Ivan of Zapresic, Croatia, and son Don of Kansas City, Kansas. She is also survived by six grandchildren and 11 great-grandchildren.

Longtime Weatherford resident Loraine Royal Witcher passed away on December 18 in the company of family members. She had been living near her son and daughter-in-law in McPherson, Kansas since breaking her neck in a fall in 2014.... View Obituary & Service Information

The family of Loraine Witcher created this Life Tributes page to make it easy to share your memories.

Send flowers to the Witcher family.